Lenovo’s Yoga line of notebooks have touchscreen displays and 360 degree hinges that allow you to fold the screen back and hold the computer like a tablet. It’s been nearly 4 years since Lenovo introduced the first Yoga convertible, and since then we’ve seen models with big screens, small screens, powerful processors, and energy-sipping Core M chips.

Now Lenovo is launching the first model that it says offers workstation-class performance for digital artists and other graphics professionals. 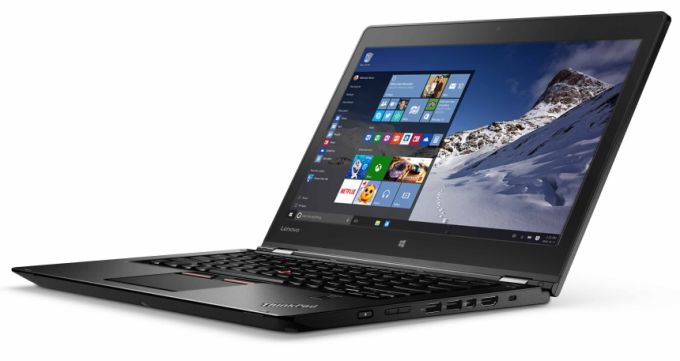 The computer has a 14 inch touchscreen display and support for pressure-sensitive input thanks to a Wacom digitizer that can recognize up to 2048 degrees of pressure when you use a ThinkPad Pen Pro.

The ThinkPad P40 Yoga is powered by an Intel Core i7 Skylake processor and features NVIDIA Quadro M500M graphics. It supports up to 16GB of RAM and up to 512GB of solid state storage. The notebook has three USB 3.0 ports, mini DisplayPort and HDMI ports, and a Gigabit Ethernet jack.

As part of the ThinkPad family, the notebook has both a touchpad below the keyboard and a pointing stick in the center of the keyboard. It also has a no-frills black case design.

While the P40 is probably the most interesting of Lenovo’s upcoming ThinkPad Yoga models, the company also plans to sell a new $1299 ThinkPad P50 Yoga model with a 2,800 x 1620 pixel display and a Core i7 processor.

Interestingly, both the ThinkPad P40 and the ThinkPad P50 were mentioned in a recently leaked product roadmap… which suggests that the document was legit and that we can expect to see other devices listed on the roadmap soon, including a 12 inch ThinkPad X1 tablet and a thin-and-light ThinkPad X1 Yoga convertible.

via PC World, ZDNet and Engadget