Oculus, Sony, HTC, and other companies are planning to launch expensive, high-tech virtual reality headsets soon. But Google beat them all to the punch with a folded up piece of cardboard and a few lenses that turns just about any smartphone into a VR headset.

There’s a growing amount of VR content that you can access on your smartphone, from YouTube videos to a new Star Wars interactive experience. But what if you want to make your own virtual reality experiences? You could invest in a 360 degree camera… or now you can just install Google’s Cardboard Camera app on your Android phone. 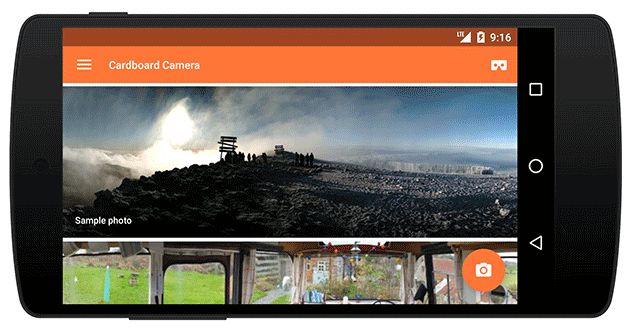 Cardboard Camera lets you use your phone’s existing camera to capture panoramic images which you can then view using a Cardboard headset. Just move your phone around in a circle when you’re taking the picture, and then when you view your images later it’ll look like you’re in the same room or on the same mountaintop where the imagery was first captured.

The app creates what Google calls VR photos, since they don’t just capture 360 degree images, but also split the images so that each eye will see something slightly different when viewed through a headset. In addition to letting you see different parts of the photo by moving your head, this lets you experience a sense of depth even when you’re looking straight ahead.