People have been trying to install Ubuntu on Android TV boxes for as long as companies have been cranking them out. But the Geekbox is something different, because it’s meant to be hacked.

Geekbuying sells the Geekbox for $110 (or less if you follow the instructions for a $20 off coupon), and the company sent me one to test. 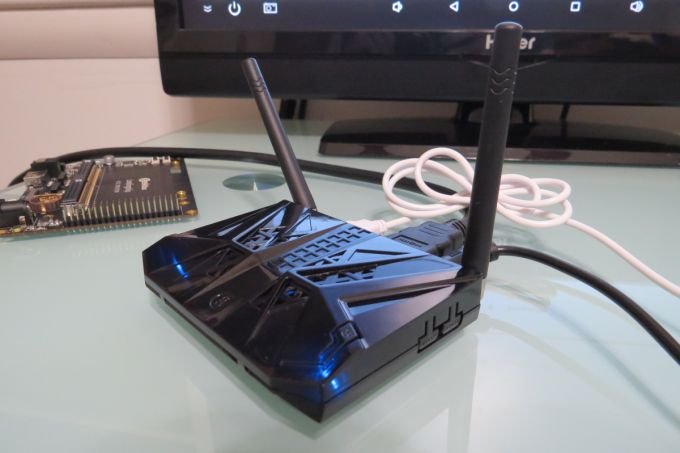 You can open the case by pulling out the adjustable antennae from the back and then lifting the lid. The system board is held in place by two small screws. Take them out and you can lift the board free.

Why would you want to do that? Well, you could connect it to optional accessories like the $30 GeekBox Landingship, which turns this mini PC into a developer board. The Landingship gives you an extra USB port, mic inputs, S/PDIF, 60 GPIO pins, and support for connecting a 2.5 inch hard drive or SSD, among other things.

Out of the box, the Geekbox runs Android 5.1 and Ubuntu 14.04 out of the box. You can switch between operating systems at will.

Or you can install a different OS. There are official downloads and installation instructions for Android, Ubuntu, the dual-boot image, or Rockchip’s Light Biz OS software which is a customized version of Android designed to feel like a desktop operating system.

Not satisfied with those choices? You can also build your own Android or Ubuntu image for the Geekbox or find other hacking tips in the user forums.

I must not have paid attention to the dimensions of the GeekBox when it was first announced, because when I first took it out of the shipping package, I was surprised at just how small the little device is. It looks like a WiFi router, but at 4.6″ x 3.4″ x 05″, it’s small enough to hold in the palm of your hand. 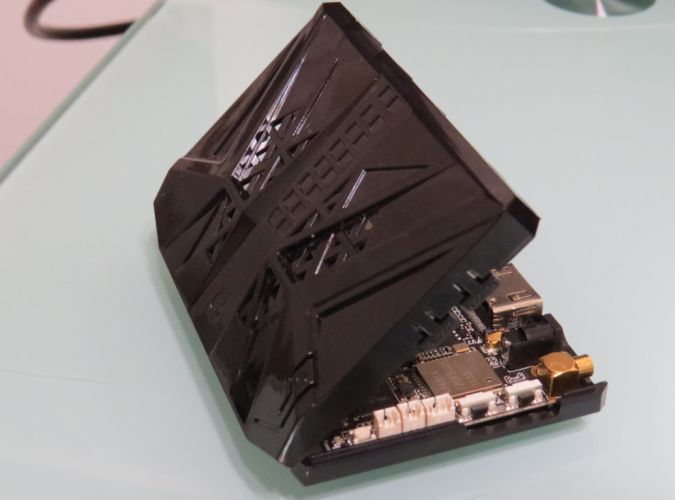 There are vents in the top of the case and a heat sink over the CPU to help keep things cool. If you plan to overclock the system or perform other tweaks that could make it run hot, Geekbuying does sell an optional fan.

There are LED lights which glow purple when the device first turns on and then the lights turn blue during normal operation. On the top of the box is a power button and there are dedicated reset and update buttons on the side. Since the board is meant to be removable, those buttons are basically flexible bits of the plastic case that press against the buttons on the board itself. You can press any of those buttons with your fingertip to access the same functions when using the board without its case. 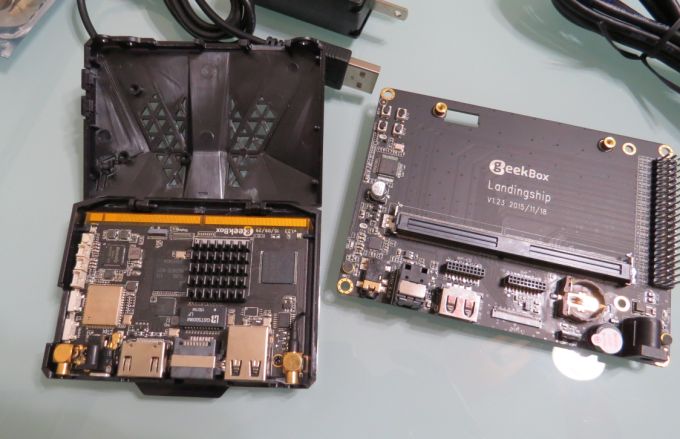 I took the stock software for a spin, and Android 5.1 works pretty well. A few apps including the Kodi media center come pre-installed, and the Geekbox is pre-rooted. The web browser, YouTube, and Netflix apps all worked nicely, and I was able to install other apps from the Google Play Store. Rayman Jungle Run worked particularly well with my Xbox controller. 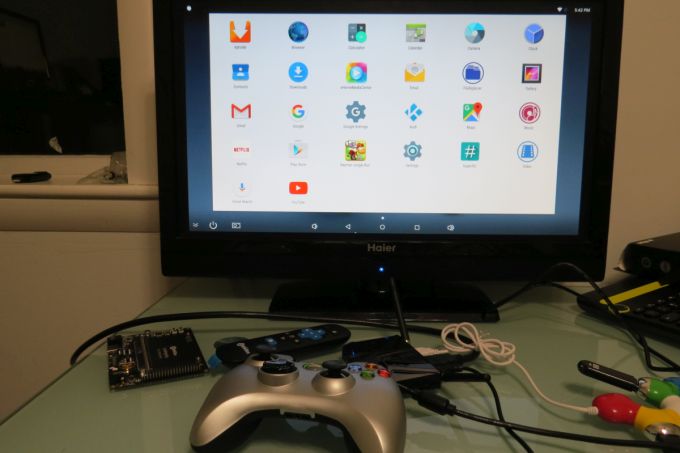 The Geekbox also comes with an infrared remote control that you can use to control media playback or use home, menu, or back buttons. There’s also a mouse function that lets you slowly move a pointer icon across the screen.

If you plan to do any web surfing, emailing, or document editing you’ll probably want to plug in a keyboard. But the remote may be all you need if you plan to use the Geekbox as a media center.

Tap the power icon and you get options to shut down, reboot, or reboot into Linux. If you choose the last option, it takes just a moment to boot Ubuntu 14.04 LTS. 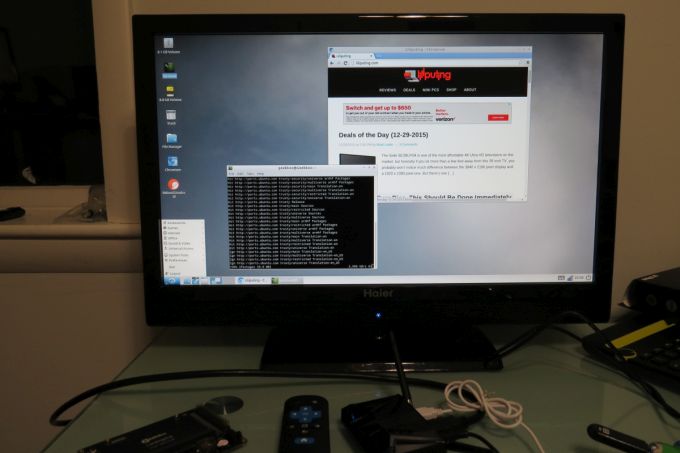 This gives you a desktop-friendly user interface and support for desktop apps such as the Chromium or Firefox web browsers. I tried installing some third party apps with mixed results. The AbiWord word processor works perfectly. The SuperTux video game installed, but crashes every time I try to run it.

The version of Ubuntu that comes with the GeekBox lacks support for hardware-accelerated video or graphics. While I was able to play some H.265 video samples in Android, those same files wouldn’t play at all with the built-in video player in Ubuntu. YouTube videos sort of played, but the audio was drowned out by loud static. 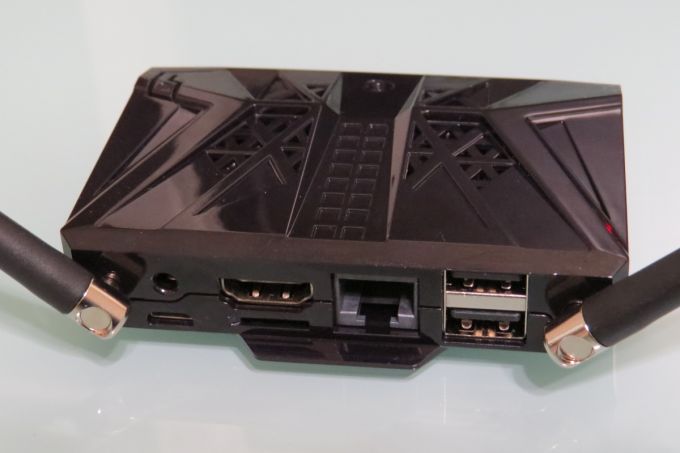 Since it’s possible to build and load your own custom operating systems, it might be possible for someone to resolve these issues in the future.

One issue that’s already been addressed is the question of storage space: if you need more space for apps, you can resize the apps partition to make up to 6GB available. There’s a method for doing that from a Linux machine and a related method for using a Windows PC.

If you’re just looking for a box that lets you run Android apps on your TV, there are probably cheaper options than the GeekBox. If you’re looking for a fully functional Linux PC, you should probably look elsewhere. 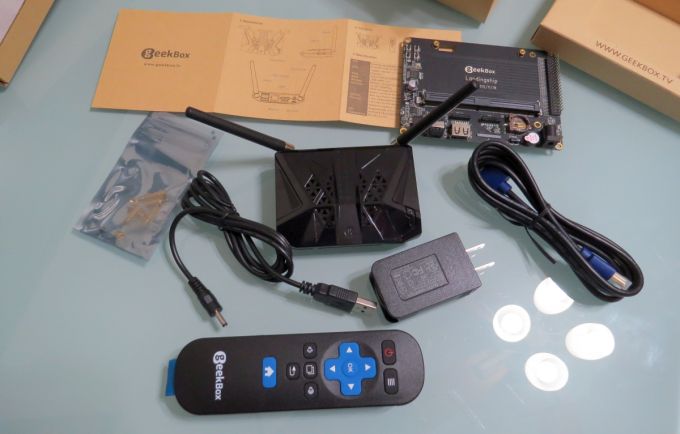 But the GeekBox fills an interesting niche: it’s sort of what you’d get if you crossed a Roku with a Raspberry Pi, except it has more powerful hardware than either of those devices. You can use it as a media or gaming box. But you can also use it as a development board for hardware or software-related projects. You can alter or replace the operating system without voiding the warranty.

And while you could buy a dozen Raspberry Pi Zero computers for the price of a single GeekBox, this little computer is still pretty cheap compared to most Intel-powered machines.