Firefox OS is an operating system designed around the same technologies used in the Firefox web browser. So maybe it shouldn’t be surprising that the latest build of Firefox OS adds one of the key features of the web browser: support for add-ons.

Mozilla has released Firefox OS 2.5, and among other changes, the new version of the OS supports add-ons that can change the behavior of individual apps, multiple apps, or the entire operating system. 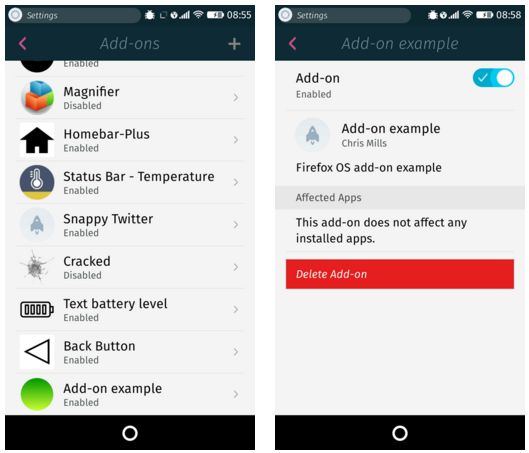 Other new features in Firefox OS 2.5 include support for the same Tracking Protection feature that was recently added to the browser, and a new “Pin the Web” feature that lets you save any web site as an icon on your home screen so that web apps are treated like native apps.

Don’t have a device that runs Firefox OS? You can sort of try the operating system on an Android phone.

Mozilla has released an updated Firefox OS 2.5 Developer Preview app which installs like a normal Android app and functions like a home screen launcher. It doesn’t perfectly emulate the Firefox OS experience, because it doesn’t replace Android’s navigation buttons, task manager, notifications, settings, or other features. But it will let you interact with the launcher and some third-party apps.

You can also use Mozilla’s tools to replace Android with Firefox software on some devices, but that’s a bit more of a commitment than installing an Android app that can be easily uninstalled.