Have a smartphone? Then you probably already have a portable audio player that you can use to listen to MP3s or stream music from Spotify, Google, Apple, or YouTube, among other services.

But some audio enthusiasts are less than satisfied with the sound quality offered by most smartphones, which why we’e seen fancy, expensive dedicated audio players like the Sony Walkman NW-ZX2 and PonoPlayer in recent years.

Now there’s a new Android-powered portable Hi-Fi device called the Echobox Explorer X1 on the way, and this one is designed to support high-quality audio streaming form services like Tidal. Oh yeah, it also looks like a wooden flask for some reason.

Echobox plans to sell the Explorer X1 for $499, but the company is running a crowdfunding campaign on Indiegogo, and early backers can request a unit for a pledge of $249 or more. The Explorer X1 won’t ship until April, 2016 though.

Under the hood, the Explorer X1 has a Rockchip RK3188 processor, a 3,700 mAh battery, 64GB of built-in storage, and a microSD card slot that supports up to 128GB of removable storage. 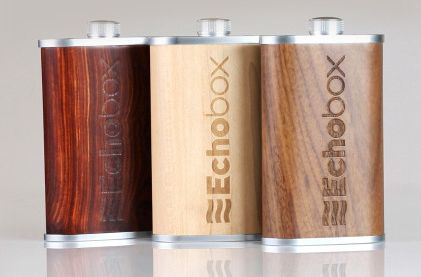 Audio hardware includes a Texas Instruments OPA 300 mW amp, and a TI PCM1792 digital audio converter. The system can handle lossless audio formats including FLAC, WAV, and AIFF. And the nifty thing about the flask design is that instead of a spout at the top, you get a hardware knob that functions as a power button and volume dial.

Buy an Explorer X1 and you get a 3-month subscription to TIDAL, but the system runs Android 4.2 with a custom user interface, so you should be able to run other third-party Android music apps. There’s a touchscreen display on the for of the device for navigating apps and menus. 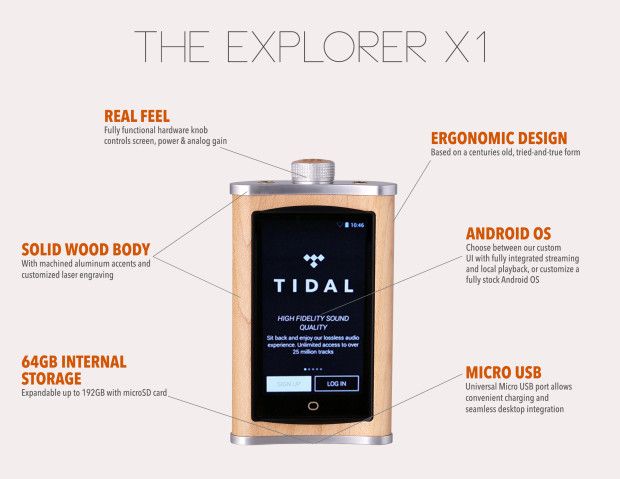 Echobox is also introducing a Finder X1 set of titanium earbuds with a sturdy build (they come with a 3-year warranty) and customizable sound thanks to support for interchangeable acoustic filters that adjust the base or treble.

The Finder X1 earbuds are expected to sell for $199 when they go on sale to the public, but backers of the Indiegogo campaign can reserve a pair for a pledge of $79 or by opting for a bundle that includes both the music player and the earbuds.

I haven’t personally listened to audio played through the Explorer X1 media player or Finder X1 earbuds, but folks who have used them seem pretty impressed with the audio quality. The introductory pricing also makes these devices a lot more exciting than the suggested retail prices: it’s a lot easier to justify spending $369 for a bundle with the media player, earbuds, and a 3-month Tidal subscription than the eventual $698 price for that same bundle.

You’ll just have to wait a while: the earbuds should begin shipping in December, but the Explorer X1 isn’t expected to ship for another 6 months… and there’s always the risk that they might never ship at all. That’s been known to happen with products paid for through crowdfunding.

Want a closer look at the Explorer X1… and it’s insides? The FCC has you covered: