A little over two years ago Google launched the original Chromecast: a $35 dongle that you plug into the HDMI port of your TV to stream media from online video and music sites. It was the most affordable media streaming device released, and also one of the simplest to use… kind of.

There was no remote and no user interface to speak of. Instead you just fire up YouTube, Netflix, Pandora, or other apps on your phone tablet, or web browser and tap a button to play them on your TV. 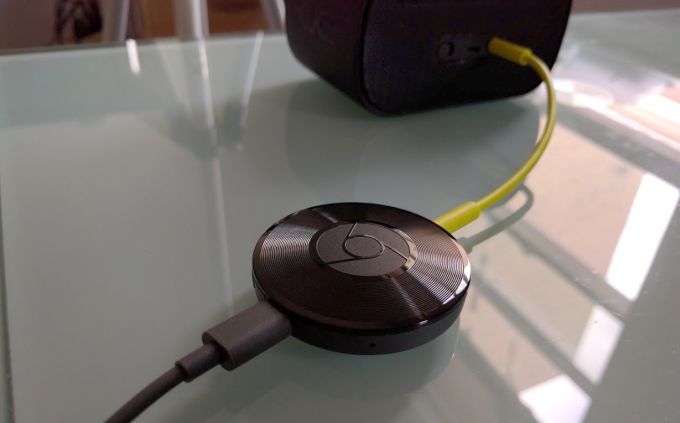 This year Google updated the Chromecast with a new model featuring faster WiFi, a new design, and a few other tweaks. But the company also did something a little more surprising: Google released a Chromecast Audio device that has a 3.5mm audio jack instead of an HDMI connector.

The idea is that you can plug the Chromecast Audio into just about any speaker to turn it into an internet-connected speaker.

Google loaned me a Chromecast Audio to test, and I’ve been using it for a few weeks. It’s incredibly easy to set up and use and there’s a lot to like about the little internet music adapter. But it probably only makes sense to buy one if you’ve already got a set of high-quality speaker that don’t already support streaming music over WiFi or Bluetooth.

The Chromecast Audio is a 2 inch disc of plastic with grooves that make it look like a tiny record. It weighs just over an ounce and comes with a small 3.5mm audio cable and a 5.5 foot USB charging cable and adapter. 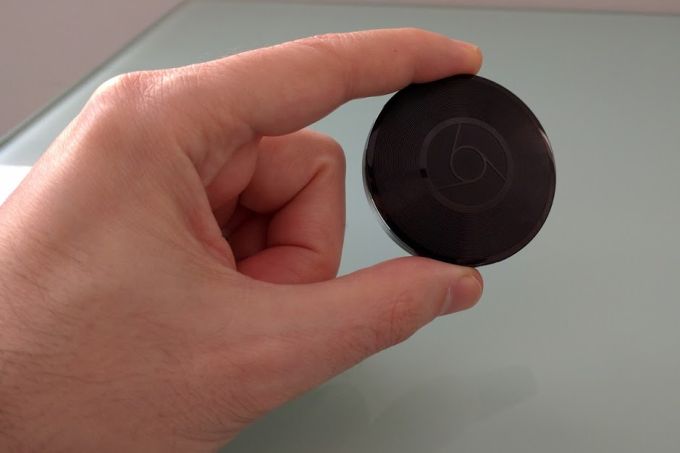 Both the new Chromecast and Chromecast Audio have the same $35 price tag, and under the hood they have virtually identical hardware. The only real difference is that one has audio/video output and one is audio only. While it might seem like that means the Chromecast Audio is less versatile than the Chromecast, it’s really just designed to do something a little different.

Sure, you could plug the video model into a speaker by picking up an HDMI to 3.5mm adapter. But the Chromecast Audio is designed to work with speakers out of the box. 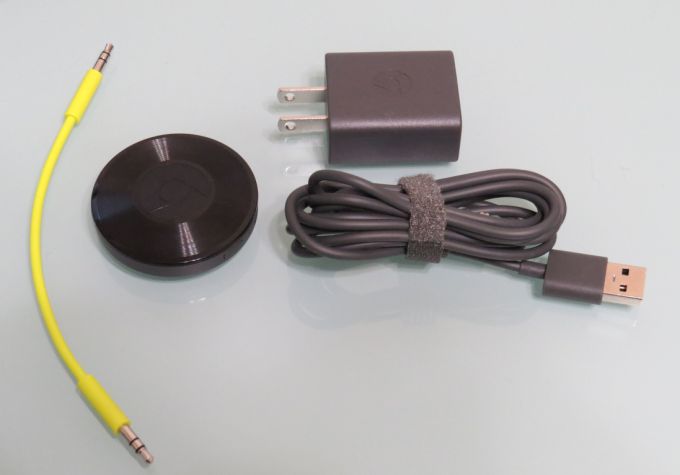 That means you can easily plug into your Hi-Fi speakers, studio-quality headphones, or just about anything else with a 3.5mm audio jack and use it to stream music, podcasts, or internet radio while using your phone as a remote control. You can also use optional RCA or optical cables if your speakers don’t have 3.5mm jacks, but they’re not included in the box. 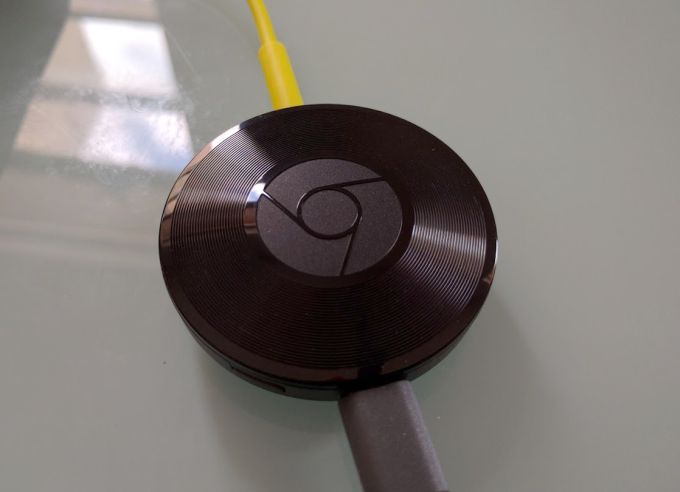 Sure, you could also buy a Bluetooth speaker, but Chromecast Audio lets you use the speakers you may already have, which makes the $35 dongle a lot cheaper than buying a new high-quality set of speakers.

You also won’t have to worry about audio dropping out when a phone call or text message comes in… and depending on the apps you’re using to stream music from, you also might not have to worry about draining your smartphone battery. That’s because your phone acts like a remote control, but with officially supported apps the Chromecast uses a WiFi connection to grab music straight from the internet without using your phone as a passthrough.

You can also stream audio directly from your phone to a Chromecast if you want to play music or other audio files that are stored locally. But that will have a greater impact on your phone’s battery life.

How do you use it?

Here’s how to set up the Chromecast Audio:

That’s it. The whole thing should take a few minutes or less. When your done you never need to open the Chromecast app again unless you want to. Here’s a pictorial overview:

Once your device is setup, you can just hit the Chromecast icon in any supported app to begin streaming music to the Chromecast Audio instead of playing it over your device’s built-in speakers. That icon looks like a small box with a few round lines in the left corner to indicate wireless connectivity or something. 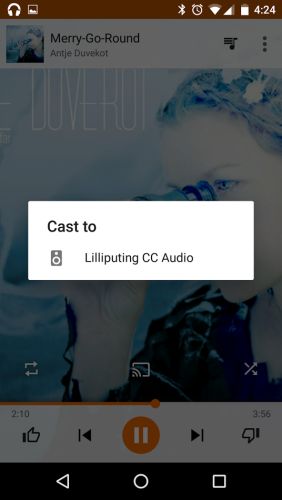 If you do want to find Chromecast-compatible apps, the official Chromecast app is handy. I haven’t tried the iOS version, but the Android app has a What’s On section that shows you all the apps that are already installed on your phone which you can use to stream to the Chromecast Audio. 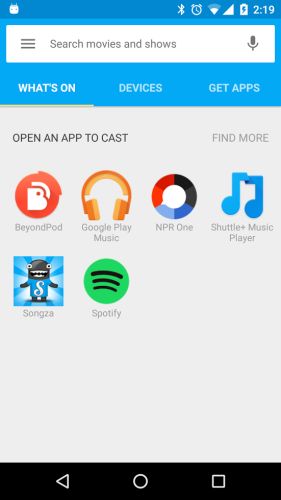 The Devices tab shows any Chromecast you’re currently connected to, along with a play/pause icon, a volume button, and a stop casting option. You can also tap the settings icon to get information about the device including the name, time zone, network, and toggles for playback sounds (when you start casting or change the volume) and for high dynamic range audio playback.

If you slide over to the Get Apps tab, Google will recommend other apps from the Google Play Store which are also compatible with your Chromecast or Chromecast Audio device.

Want to listen to audio from apps that don’t officially support Chromecast streaming? On an Android device you can do that too. Just pull down the Quick Settings panel, tap the Cast icon, and choose your Chromecast.

Now audio will be streamed from your phone or tablet directly to the Chromecast Audio. This doesn’t work quite as well: you won’t see playback buttons in the notification area, for example. And when I used this method for streaming Youtube to a Chromecast, I noticed that audio sounded OK, but it was out of sync with the video playing on my phone.

At least as of the time that I’m writing this review, the TuneIn Radio pp is another one that doesn’t officially support ChromeCast Audio. Since this app has no problem streaming music in the background, you can turn off the display or switch to other apps while listening. But the audio is routed through your phone, which means that you’ll have a greater battery drain and if any other sounds play on your phone you’ll hear them on your speaker as well as the audio from TuneIn.

So while just about anything that can play on your phone can be streamed to Chromecast Audio, you’ll have the best results if you use officially supported apps.

While you could leave the low-power media streamer plugged in and turned on all the time, I’ve found that it only takes a few seconds to boot. So you don’t lose much time by leaving it unplugged when it’s not in use and connecting the power cable to the micro USB port when you want to start streaming. 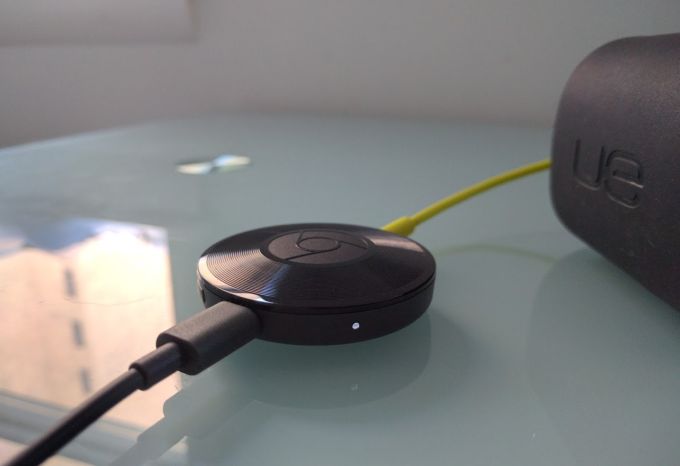 There’s a status LED that glows white when the ChromeCast Audio is on, and orange if there’s a problem. If you see a solid orange light, Google recommends unplugging the device, waiting a minute, and plugging it back in. You can also factory reset your device if problems persist: it only takes a few minutes to set up the Chromecast Audio again.

The LED will glow orange if Google is rolling out a software update to the Chromecast Audio. When the update is completed, the light should turn white.

Is it better than other media streaming solutions?

Maybe. It’s cheap. It’s easy to set up. And the sound quality is only limited by the quality of your speakers.

If you’ve got some great speaker that you’ve been using for years, a Chromecast Audio could bring them into the 21st century for just $35.

On the other hand if you’ve already got a Sonos or another internet-connected speaker, I’m not sure it makes a lot of sense to switch. You could always just plug in the Chromecast Audio if you want to tap into the Google Cast feature that lets you stream music from apps just by tapping the cast icon. 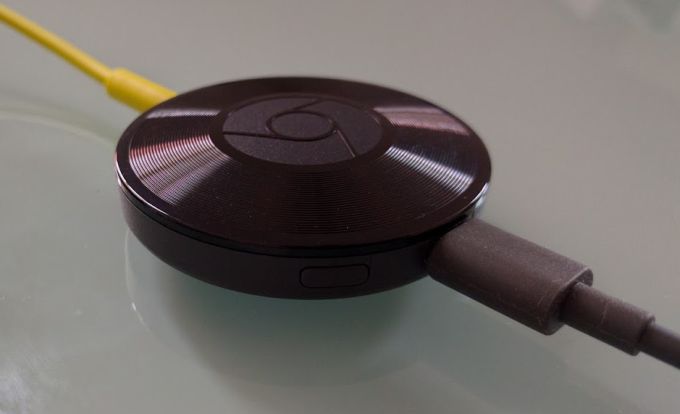 But here’s my home audio setup: I’ve got speakers in my office and in my living room that are already plugged into computers. I disconnected them and hooked them up to Chromecast Audio for testing purposes, and they sounded fine. But there’s really no advantage to using Chromecast Audio for these speakers since anything I can stream through my phone I can also stream through a PC.

I’ve also got a portable Bluetooth speaker that I use mostly in the kitchen when I’m cooking, but which I also carry around the house while cleaning, down to the basement, and sometimes in a suitcase when I’m traveling. I can plug the Chromecast Audio into that speaker, and it does bring all the advantages mentioned above including the phone battery-saving feature of having audio stream directly over the internet to the Chromecast without going through my phone. 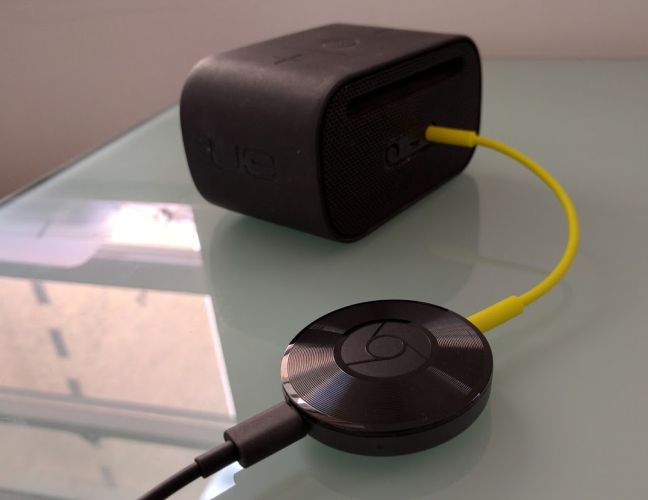 But the Chromecast Audio doesn’t have a battery. That means it works fine when it’s stationary. But I can’t carry it around the house with that portable speaker.

Theoretically, streaming music over WiFi instead of Bluetooth could lead to better sound quality, since WiFi is a faster wireless protocol that can support higher bit-rate audio streaming. But I didn’t hear much difference in the Loigtech UE Mini Boom speaker or Sony MDR-V6 headphones I tested with the Chromecast Audio. 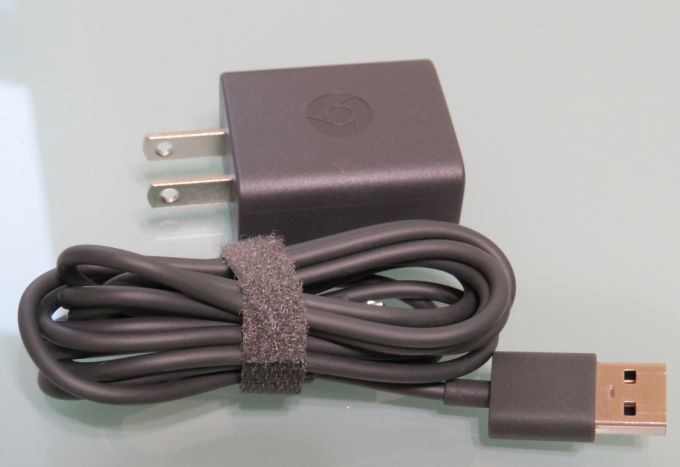 So even though I’ve had the Chromecast Audio in my house for a few weeks, I’ve kind of had to force myself to use it. When I cook meals I typically fire up the Bluetooth speaker in the kitchen and pull up the TuneIn Radio app on my phone to listen to the news or Google Play Music, Spotify, or another music app if I feel like streaming music instead of talk. I usually charge my phone or the speaker while I’m doing this, but I know that if I need to get up and move to another room I can pick them both up and go. With the Chromecast Audio, I’d be tethered to the wall. 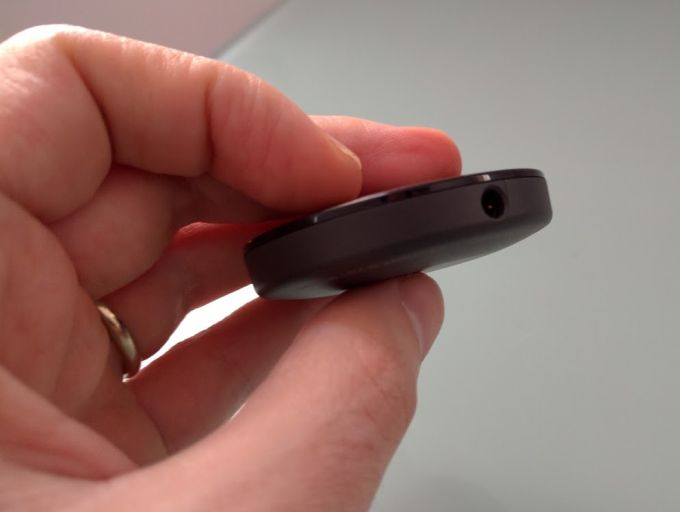 I’m not sure I need a Chromecast Audio in my life. But if I didn’t already have a Bluetooth speaker or if I had a set of Hi Fi speakers that I wanted to connect to the internet, I’d definitely consider picking one up.

Another thing to keep in mind is that Google expects to add multi-room streaming to the Chromecast Audio platform. Right now if you buy a few units and connect them to different speakers around your house you can only play to one at a time. This could come in handy if you’re listening to music in one room and want to keep the party going in another. But a future update is expected to let you stream music to multiple speakers simultaneously.

That could make Chromecast Audio an affordable alternative to more expensive multi-room systems like the one offered by Sonos (whose speakers sell for $199 and up). 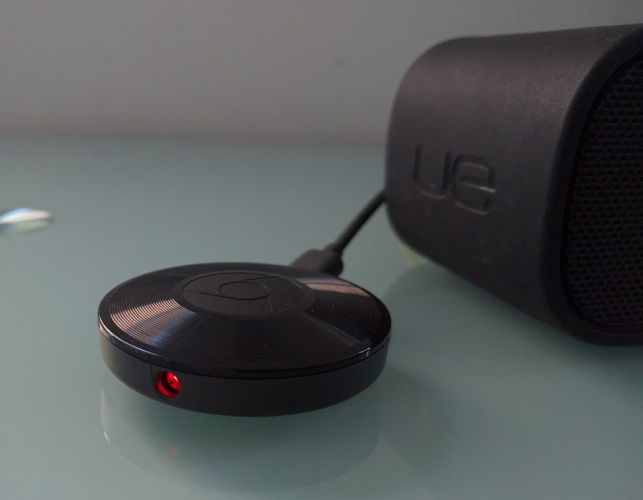 When multi-room support rolls out, it could be the killer feature for Chromecast Audio that helps make it truly stand out. For now, I just don’t see much reason to use

For now, I’ll probably stick with my Bluetooth speaker and PC-connected speakers. But I can envision plenty of situations where a Chromecast Audio would come in handy. It certainly delivers on its promise of making it just as easy to stream audio to any speaker as the original Chromecast makes to stream video to any TV.