Google’s latest Nexus phones have different screen sizes, display resolutions, processors, and starting prices. But they also have a lot of things in common: they both run Android 6.0 Lollipop, they both have the same 12.3MP rear cameras and Nexus Imprint fingerprint sensors. And they both have USB Type-C ports.

While those ports only support USB 2.0 data transfer speeds, they do have a few nifty features including support for those fancy new reversible USB Type-C charging cables and support for fast charging.

Both phones ship with a USB Type-C to Type-C cable which looks the same on both ends. So… what happens when you use one of those cables to plug a Nexus 5X into a Nexus 6P? 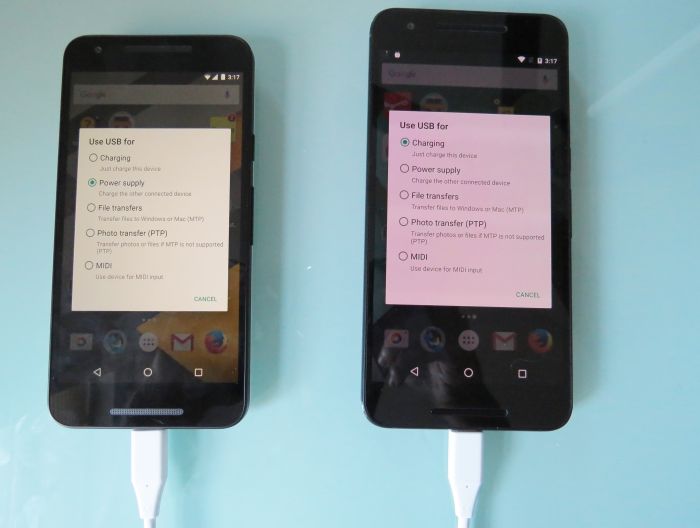 Yep. You can use one phone to charge the other.

Once the cable is plugged in, one phone will automatically start charging by drawing power from the battery of the other phone. I’m not entirely sure how the phones decide which one should start charging and which should act as a power supply, but you can always switch roles.

Just swipe down from the notification tray and you’ll see note that says “USB for charging.” Tap it, and you’ll see a screen that asks what you want to USB for. You can choose Charging or Power Supply. 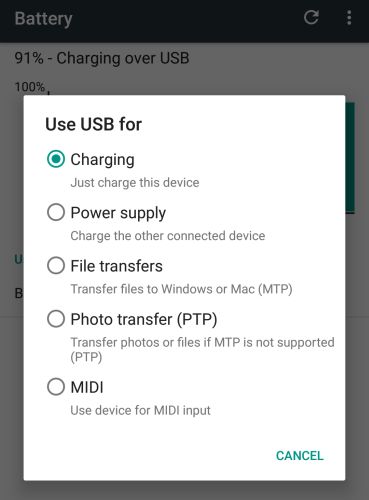 If the Nexus 5X is charging, tapping Power Supply will cause the Nexus 6P to start charging. Or you can choose “Charging” on the Nexus 6P instead. The result is the same.

Theoretically this could open the door for using a tablet to charge a phone on the go… or vice versa. In practice, all I can say for certain is that you can use the Nexus 5X and Nexus 6P to charge one another. Because those are the only Android 6.0 devices with USB Type-C ports I’ve tested.

I did try one other thing though: connecting a Nexus 6P to a Nexus 5 by using a USB Type C to Type A cable and a USB Type-A to micro USB adapter.

That allowed me to use the Nexus 5 battery to charge the Nexus 6P. But there’s no option for sending power the other way: the notification tray doesn’t show any USB charging options on the Nexus 5 at all when the cables are plugged in.

Android Police notes that other devices have similar quirks: even phones and tablets with USB Type-C ports may only support one-way charging. Things might become standardized as more devices with Android 6.0 and USB Type-C connectors hit the market. But right now this only seems to fully work on a few devices.