Most smartwatches on the market look like traditional watches: they’ve got a watch face and a separate wrist strap that holds the watch to your body.

But the upcoming Wove Band is basically one big screen. That’s because it uses a flexible E Ink panel as its display. The entire screen can bend around the curve of your wrist, allowing you to view and interact with content along most of the wrist strap.

The makers of the Wove Band hope to bring their watch to market in 2016, but the folks at Android Authority have an early look at a prototype. 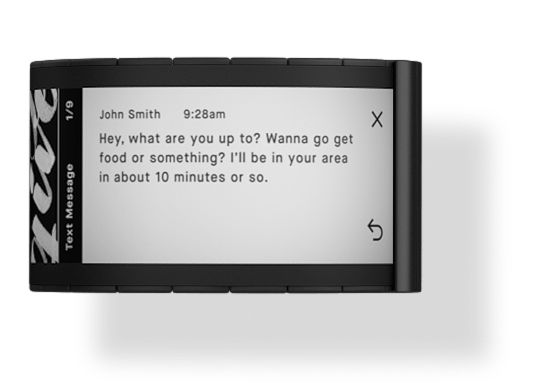 The device features a 1024 x 200 pixel grayscale, touch-sensitive E Ink display on one side, and a series of segments on the other that can bend around your wrist.

There are a few larger sections where the Wove Band hides its charging port, processor, battery, and other hardware.

Right now, the developers are showing demo software that gives us an idea of what the device might eventually be able to do. It could decorate your wrist with artwork, turning the Wove Band into a bracelet. But it could also display full-text for email messages or other content, allow you to view a notification on the top of your wrist (where a normal watch would hang out), and flip over your wrist to read the full message.

The Wove Band features a 1 GHz ARM Cortex-A7 processor, 4GB of storage, 512MB of RAM, and a 230 mAh battery. It runs a modified version of Android 5.1 called WoveOS.