Toy maker Mattel has brought the classic View-Master into the 21st century. Earlier this year the company announced plans to launch a Google Cardboard-compatible virtual reality headset that lets you drop a smartphone into a case, hold it up to your eyes, and explore virtual environments.

Now it’s available for purchase for $30. And while you could buy or build your own Cardboard headset for less money, early reviews of the View-Master Virtual Reality Starter Pack are pretty positive. 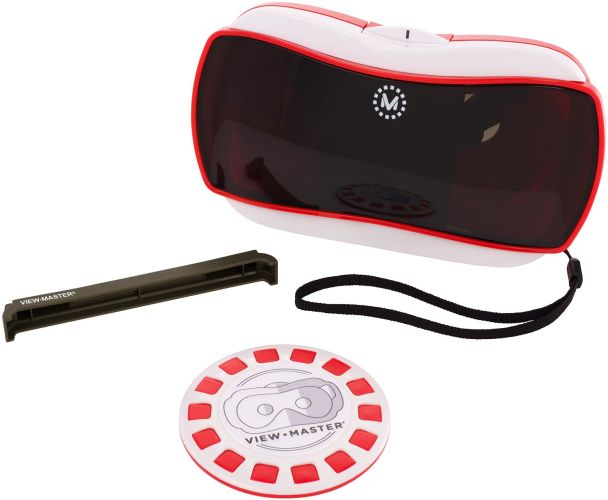 The classic View-Master was designed to let you insert a wheel with a series of tiny photos that would look big when you held the device up to your eyes. You could then advance through the series to view more content.

The updated version is a bit more high-tech, and allows you to immerse yourself in virtual worlds. Move your head and you can see a different part of the action. Any app for Google Cardboard should work with the View-Master, but Mattel also has its own Android and iOS apps with some free preview content and support for a series of “experience packs” which are sold separately for $15 each.

You can unlock a space exploration, virtual safari, or travel destinations experience pack through an in-app purchase or by purchasing a physical experience reel that will unlock the content. The reels also support augmented reality: when your phone’s camera is pointed a real, you’ll see previews (like a space shuttle) above the disc.

Even if you’re not interested in Mattel’s experience packs, the View-Master VR kit seems like an interesting value proposition because it’s sturdier than an actual Cardboard device made of, well, cardboard. And it’s got some retro cool cred.