The company has released tools to let any device maker tap into the Alexa service, and the company has announced that Invoxia’s upcoming Triby device will be the first third-party product to use Alexa and offer far-field voice capabilities. That means Triby can hear you even if you’re not standing right next to it.

Triby is a connected speaker and communication device designed for use around the home. It’s available for pre-order for $199 and it should ship in November. 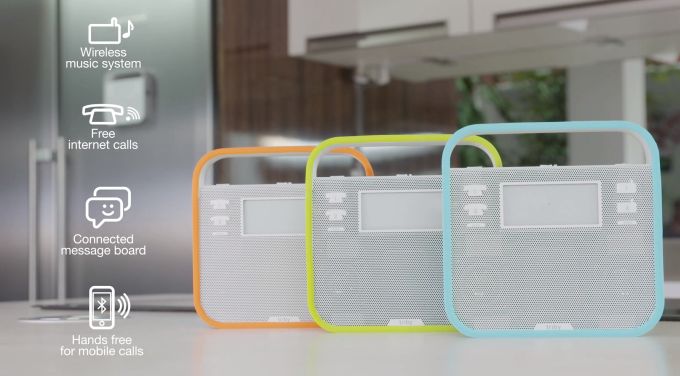 So what exactly is Triby? It’s a device with a speaker, 4 microphones, a battery, and a magnet that lets it attach to a refrigerator or other metal surface. There’s also a small screen on the front of the device and a few buttons for shortcuts.

You can use the device as an internet-connected communication device. It connects to the internet over WiFi and you can use it as a Bluetooth speaker to take incoming calls from your smartphone. You can also make voice-over-internet calls to contacts saved in the device, offering a simple way for kids to call their parents with the click of a button, for instance.

When you’re away from home (or in another room) you can also hand write a message or draw a picture using a mobile app and send it to the Triby’s display — and a little yellow flag will pop out to let people know there’s a new message.

Take the Triby off your refrigerator and you can and carry it around the house, place it flat on a table or countertop, and use it just about anywhere in the house. Worried that you’ll trip over the power cable? No problem: Invoxia says the Triby offers up to a month of standby time, so you should be able to leave it unplugged most of the time and just charge it when it’s not in use.

Thanks to Alexa integration, you can ask questions, set reminders, control media playback, and perform other actions. While the Triby isn’t the first third-party device to support Alexa, Amazon says it’s the first that you’ll be able to speak with from up to 15 feet away, something that’s currently only supported by the Amazon Echo.