The tablet has a 12 inch display and a detachable keyboard dock. But it’s stand-out feature is probably its support for pen input. The Toshiba dynaPad comes with a Wacom Active Electrostatics TruePen with support for 2,048 levels of pressure sensitivity. 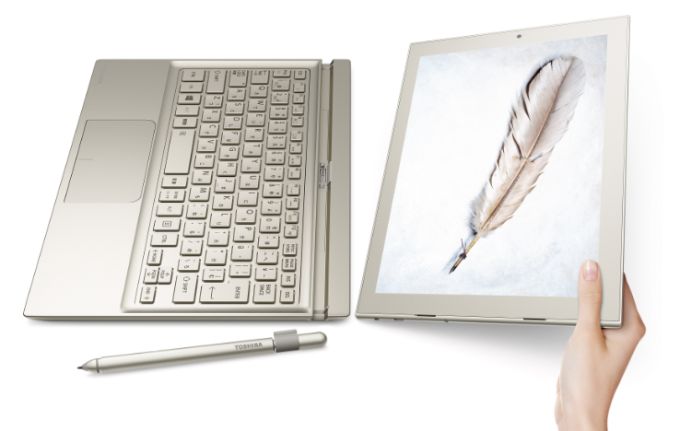 By comparison, the new Microsoft Surface Pro tablet has a digitizer and pen that supports 1,024 levels of pressure sensitivity. I suspect casual users won’t notice much difference when scribbling hand-written notes, but this could make the Toshiba dynaPad a better option for artists.

The tablet has a 1920 x 1280 pixel IPS display with a dual-layer coat of anti-reflection and anti-fingerprint material.

The dynaPad weighs about 1.25 pounds, while the tablet and keyboard combined weigh in at about 2.2 pounds.

Microsoft says the dynaPad goes up for pre-order in Japan today, but it’ll also be available in the US and Europe in the first quarter of 2016 (although I suspect it might have a different name — Toshiba tends to use the “dyna” name in Japan, while labeling its international products with names like “Satellite”).

Other features include an Intel Atom Cherry Trail processor, 4GB of RAM, 64GB of storage, 802.11ac WiFi, Bluetooth 4.0, a microSD card slot, micro HDMI port, and two micro USB ports. You might want to take the specs with a grain of salt though, since Toshiba’s spec sheet also says the tablet has an Atom x5-Z8300 processor… which only supports up to 2GB of RAM.

Hopefully that means by the time the tablet ships Toshiba will update the spec sheet to show that the tablet has a more powerful processor rather than less RAM than expected.