The Microsoft Surface Pro 4 sells for $899 and up, but if you want a model with more than 4GB of RAM and more than 128GB of storage, you’ll need to pay a lot more.

Want to just buy an entry-level model and upgrade it yourself? You might be able to do that… if you’re very careful and only interested in upgrading the storage. 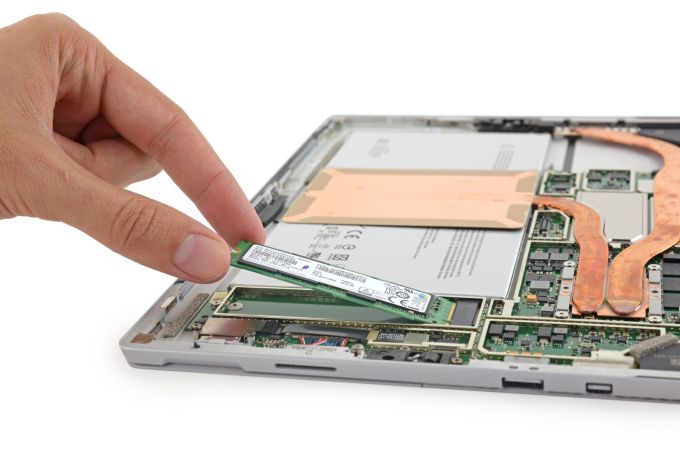 The folks at online repair shop iFixit have made a habit of posting teardown guides for most high-profile gadgets shortly after they’re released, and the Surface Pro 4 is their latest victim.

While they weren’t able to open up last year’s model without cracking the screen, this year’s tablet did survive the surgery. But opening up the tablet does require a heat gun, opening tools, and a lot of patience. There are plenty of ways things could go wrong.

Your reward for getting inside is the ability to replace a few broken our aging parts such as the battery or speaker. But the only thing that looks like it’d be easy to upgrade is the solid state drive. The RAM is connected to the motherboard, so if you buy a Surface Pro 4 with 4GB of RAM that’s all the memory it will ever have.

Other information gleaned from the teardown include the fact that the Surface Pro 4 has a 5087 mAh, 38.2 Wh battery and the fanless model with a Core M processor seems to have an empty space where you’d probably find a fan on the higher-power models. I wonder if there’s a way to use that space for an extra battery or something.

You can find more photos and other details at iFixit.

4 replies on “Surface 4 Pro teardown: SSD is replaceable, not much else is”