Solu Machines is running a Kickstarter campaign for an unusual type of computer. The Solu is a mini PC that measures about 4.5 inches square and has a touchscreen display, so you can use it sort of like a mobile phone or tablet. But connect it to a monitor and keyboard and the Solu becomes a touchpad that you can use to interact with desktop on a bigger screen.

You can reserve a Solu device for a pledge of 349 Euros, which is about $385. But Solu is also hoping to get you to sign up for SoluCloud subscription: plans range from $1 per year for a very basic plan to $49 per month for 5 terabytes of storage. 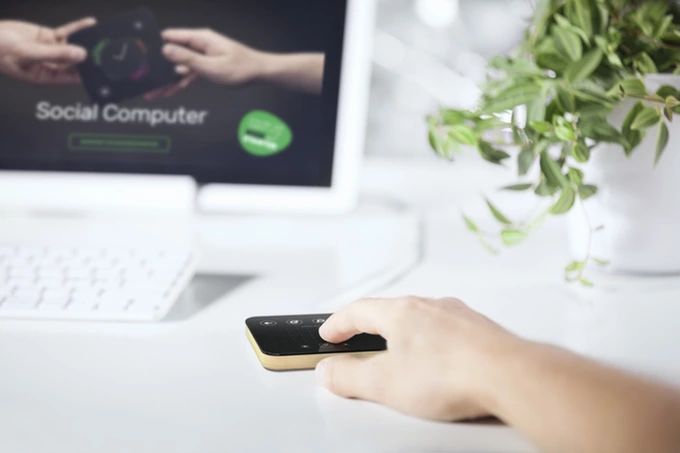 To be honest, I’m not entirely sold on the subscription service: the $1 plan only buys you access to online collaboration services and you have to pay $19 per month or more for cloud storage.

But I think the hardware is kind of interesting. At a time when Microsoft and Canonical are developing software that lets you use a smartphone like a desktop by connecting an external display, keyboard, and mouse, Solu Devices is taking a slightly different approach by offering a device that’s not a smartphone at all, but which works as a sort of portable desktop that you can use as a touchscreen device when it’s not docked.

The Solu has a 1440 x 1440 pixel touchscreen display, an NVIDIA Tegra K1 processor, 4GB of RAM, and 32GB of storage (which the developers call “cache capacity,” since the idea is that your files would actually be stored online and synchronized with your local device when you login).

It has dual-band 802.11a/b/g/n WiFi, Bluetooth 4.0, a USB Type C port, and a 1,200 mAh battery. Solu Devices says the system can support up to a 4K external display. There’s no HDMI port, so you’ll need a USB Type C adapter for your display.

While SoluOS will have native apps including collaboration tools for co-editing documents with other users, the operating system can also run Android apps.

Solu Devices hopes to ship their odd little PC in May, 2016.

14 replies on “Solu is a touchscreen, cloud-connected mini PC for use at home and on the go (crowdfunding)”