Take a Raspberry Pi-sized mini computer, add Gigabit Ethernet, 802.11n WiFi, Bluetooth 4.0, and an FPGA with a whole bunch of I/O options, and what’ve you got? Apparently a Snickerdoodle.

It’s a new single-board computer from hardware startup krtkl. The developers are hoping to raise funds for the project through crowdfunding site Crowd Supply. You can reserve a board for a pledge of $55, which is about the price you’d pay for a Raspberry Pi + WiFi and Bluetooth dongles. 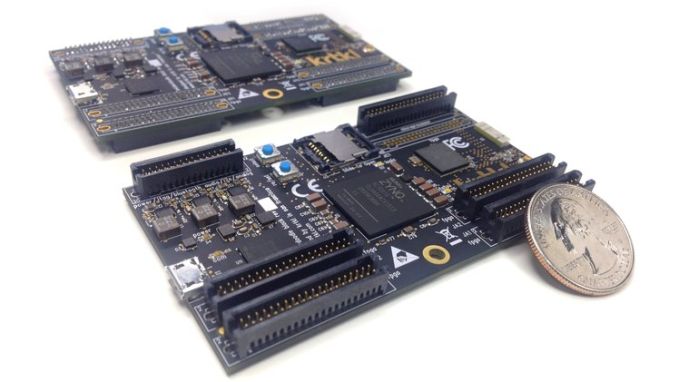 While there’s no shortage of low-cost single-board computers, the folks at hardware startup krtkl wanted to build one with support for wireless controlling motors and sensors and with custom I/O possibilities. So they designed something that looks a bit like a Raspberry Pi or Arduino board, but which has way more of the stuff you’d need built right into the board that you’d use to build a robot, drone, wireless security system, router, weather station, or other device.

The system features a Xilinx Zynq 7010 ARM Cortex-A9 dual-core processor, support for up t 1GB of RAM, 16MB of NOR flash storage plus a microSD card slot, and a micro USB port.

It’s the FPGA that makes this device stand out, since you can essentially customize the I/O through software. Note that there’s no dedicated graphics processor, so this isn’t the sort of machine you’re going to want to use to build a home theater PC. But it could be a much more versatile option than a Raspberry Pi for certain applications.

A pledge of $55 reserves a Snickerdoodle with 512MB of RAM. You can pledge at higher levels for a 1GB model, a version with dual-band WiFi, a heat sink, or other features.