The Noteslate Shiro is a digital writing slate with an E Ink screen, a stylus, and up to 3 weeks of battery life. At first glance it looks like an eReader (and you can use it as one), but the stylus lets you sketch your ideas or jot handwritten notes.

Noteslate unveiled the Shiro in May and promised it’d be available this fall. That’s not happening, but the company is taking pre-orders now for $199 and promising to start shipping the Noteslate Shiro in February, 2016. 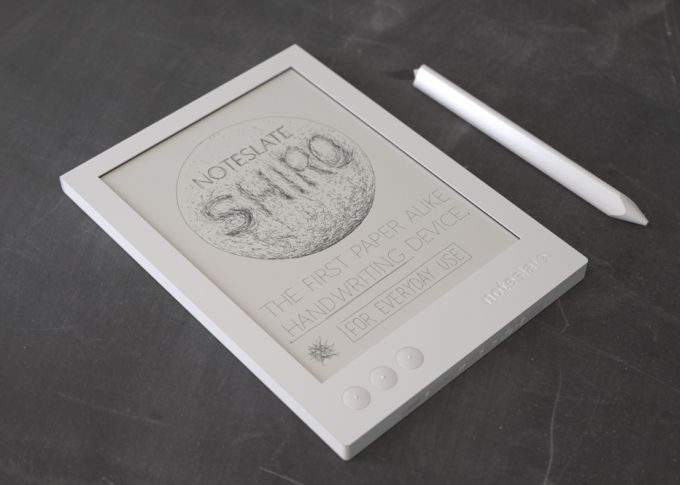 There are two versions available for pre-order. A limited-edition Signature Edition has a “unique signature” and serial number on the back. 999 of these models are available, and they’ll be the first to ship.

In March, Noteslate plans to start shipping the regular version of the Shiro. It will carry the same $199 price tag.

The device features a 6.8 inch, 1080 x 1440 pixel E Ink Pearl HD display with support for 16 shades of grey, a 1 GHz Freescale SoloLite processor, 8GB of built-in storage and a microSD card slot for up to 32GB of removable storage, and WiFi connectivity. It runs a Noteslate OS software.

Want to check out the Noteslate experience without spending $199 on the writing tablet? The company plans to release apps for Android tablets and the iPad.

Noteslate’s website says the stylus is pressure-sensitive, but I don’t see a lot of evidence of that in a demo video released by the company, and there’s also a bit of latency: it takes a moment for lines to show up on the screen after the stylus passes over the display.

You can export notes or pictures via email or by transferring them to another device with a USB cable or by saving them to a removable microSD card.

A few years ago this company released a concept for a $99 writing tablet with a 13 inch display. That model never shipped, but Noteslate has said if the Shiro project is successful, it hopes to deliver a 13 inch version eventually.

Noteslate might be the only company with an E Ink writing slate on the way. Netronix showed off 6.8 inch and 13.3 inch models using similar (or maybe identical) technology at the 2015 Consumer Electronics show in January.