The company started taking pre-orders for the Surface Book and Surface Pro 4 earlier this month, and now Microsoft says limited quantities will be in stock at Microsoft Stores including the company’s new flagship store on 5th Avenue in New York. 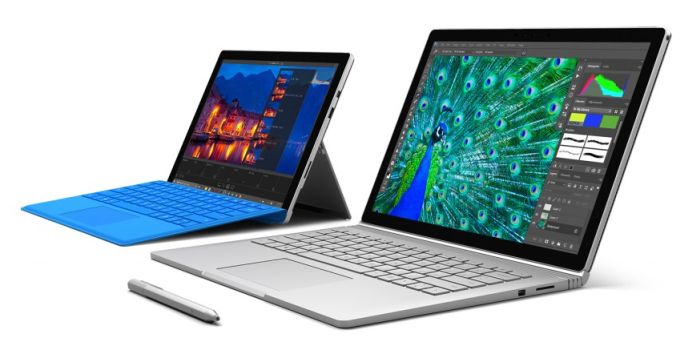 The Surface Pro 4 is a 1.7 pound, 12.3 inch tablet with a built-in kickstand, support for a pressure-sensitive Surface Pen, and an Intel Skylake processor. You can use the tablet like a notebook by adding an optional Touch Cover or Type Cover keyboard.

Prices start at $899 for a Surface Pro 4 with 4GB of RAM, 128GB of storage, and an Intel Core M3 processor. While this is the least powerful model in the new Surface Pro lineup, it’s also the only model that’s fanless. More powerful models feature Core i5 or Core i7 processors and active cooling.

Microsoft’s Surface Book is a 13.5 inch notebook with a detachable “clipboard” display, support for Surface Pen input, an Intel Skylake processor, and NVIDIA graphics in some models (the NVIDIA graphics processor is in the keyboard base, so you get the most performance when using the screen is docked to the keyboard.

The Surface Book sells at $1499 and up. While that makes this 3.3 pound notebook more expensive than an entry-level Surface Pro 4, the entry-level model has a Core i5 processor, 8GB of RAM, 128GB of storage, a keyboard with a special hinge designed for the Surface Book, and a 13.5 inch, 3000 x 2000 pixel display. There’s really nothing else quite like the Surface Book on the market right now.