Around a decade ago it seemed like a safe bet that personal computers would keep getting faster processors, more storage space, and other beefed up hardware. So when Microsoft released new versions of its operating systems, the system requirements tended to be higher than those for previous versions.

These days there are plenty of powerful computers on the market. But there’s also demand for low-power, energy-efficient, and inexpensive systems. So any computer that can run Windows 7 can also probably run Windows 8.1 or Windows 10.

And Microsoft has done a bit of work to make sure that you can even get Windows 10 to run on computers with as little as 16GB of storage (although you’re probably still better offer with at least 32GB).

Microsoft provided some details about its new space-saving technology earlier this year, but now Microsoft’s Michael Niehuas provides a more in-depth look in a technet blog post. Looking for a plain English translation? AnandTech has you covered. 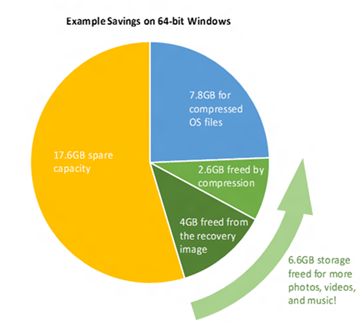 Here’s a roundup of recent tech news from around the web. You can keep up on the latest headlines by following Liliputing on Twitter, Google+ and Facebook.