The organization’s Wayback Machine can show you what Google looked like in 1999, or what Liliputing looked like during its first month of existence in 2008. While it’s fun to see how websites have changed over time, the Wayback Machine also helps preserve information in the digital age: website can disappear in an instant because someone stops paying to renew a domain name or they can change when someone makes an edit to a Wikipedia page.

The Wayback Machine gives us a peek into the past. But right now you need to know the URL you’re looking for. Soon that will change though. The Internet Archive is working on a major redesign. Among other things, it’ll bring a search engine to the Wayback Machine. 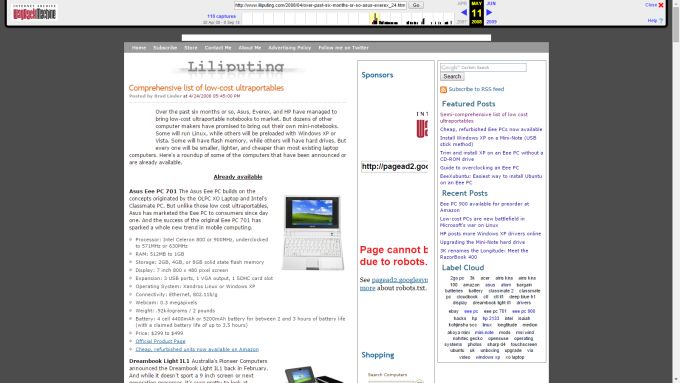 Right now the Wayback machine has over 439 billion web pages captured over 19 years. By the time the search engine is finished that number will be even larger.

The Internet Archive has received a $1.9 million grant to work on the project which is expected to be finished in 2017.

In addition to search, the redesign should include an improved user interface, reliability improvements, and enhancements to the way the Wayback Machine captures web pages. One other thing I find pretty exciting as a web publisher is an effort to work help Wikipedia and other organization to replace broken links with links to the Wayback Machine. That means that articles which link to pages that are no longer live on the internet may be updated to include links to copies of those websites.