The new HP Spectre x2 is a Windows tablet with a 12.5 inch full HD display, an Intel Core M Skylake processor, an adjustable kickstand, and a detachable keyboard cover which transforms the tablet into a notebook.

It’s a Windows 2-in-1 with premium design. But it’s got a reasonably affordable price tag: the starting price is $800, and unlike some companies, HP includes the keyboard in that price. 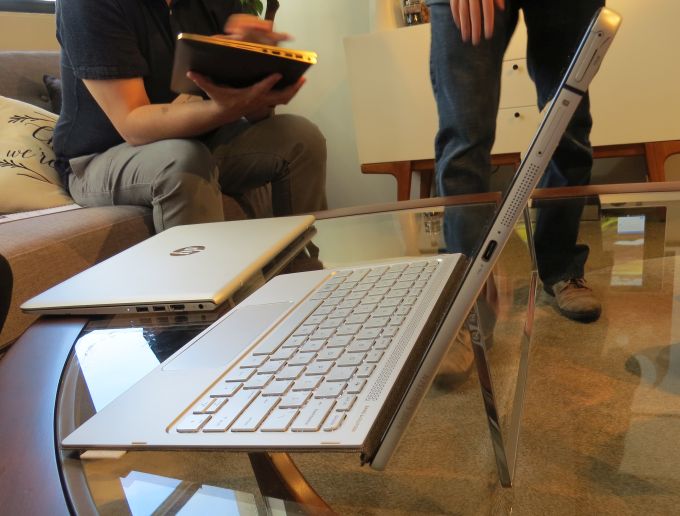 The full-sized aluminum keyboard includes backlit keys and a reasonably large touchpad. It attaches to the tablet via a strong magnet. HP doesn’t recommend doing this too often, but you can actually connect the keyboard and then hold the computer upside down while grasping just the keyboard section without the tablet falling. Just don’t jump up and down while doing that.

The tablet’s stainless steel kickstand locks into place when it’s not in use. Slide a switch on the side of the tablet and the stand pops out, allowing you to adjust the angle that the tablet is propped up at. The setup is sturdy enough that you should be able to type on the Spectre x2 keyboard when using it on your lap.

Each model has two USB Type-C connectors, allowing you to charge the tablet by plugging a USB cable into either end.

On the front of the tablet there’s an Intel RealseSense 3D camera as well as a regular 5MP camera. There’s an 8MP camera on the back.

The tablet has stereo speakers, but there are also two more speakers on the keyboard, giving you a total of four speakers with audio tuned by Bang & Olufsen.

HP also equips the Spectre x2 with an active digitizer, which means you can use a Wacom stylus to write or draw on the screen. HP sells the active pen separately for about $50.

Despite the Spectre x2’s large screen, it’s a reasonably compact device: it measures just over half an inch thick and weighs about 1.8 pounds. Add the keyboard and weight only jumps up to 2.7 pounds.