It also comes with a detachable keyboard, allowing you to use the tablet like a notebook. And prices start at $350, making this little computer significantly cheaper than a Microsoft Surface 3 tablet without a keyboard.

That said, the Satellite Click 2 has a less powerful processor than Microsoft’s tablet, lacks support for pen input, and after spending a little time with the Click 10, the tablet seems pretty nice, but the keyboard is nothing to write home about. 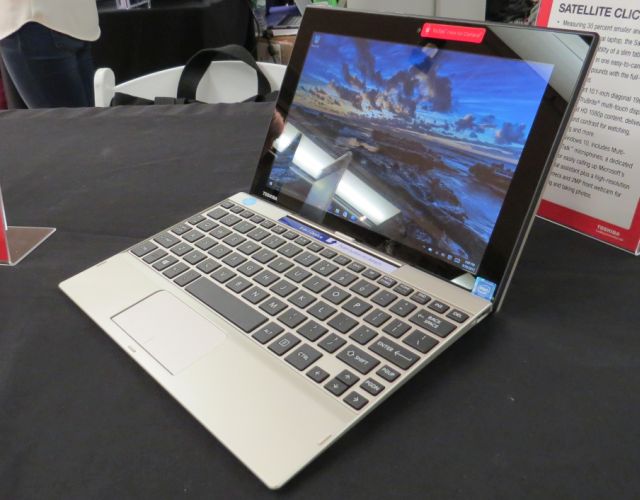 The tablet has a good looking screen with a high-resolution display and decent viewing angles. It weighs just 1.2 pounds when used without the keyboard, and feels pretty light for a tablet of this size.

Add the keyboard dock, and you’ve got a laptop that’s about 2.2 pounds, and the dock is heavy enough to keep the tablet from tipping over when you’re using it in notebook mode.

Thanks to Windows 10’s Continuum feature, you have the option of transitioning from tablet to desktop user interface and back again automatically when you connect or disconnect the keyboard.

But about that keyboard… it’s got a tiny touchpad and small keys. While I find you can generally get used to just about any keyboard layout after using it for a little while, I’m particularly concerned about the miniscule arrow keys in the lower right section. It’s pretty hard to tell them apart from one another by touch, which means you might need to look down at the keyboard in order to hit the up down, left, or right buttons.

The tablet has a microSD card slot, micro HDMI and micro USB ports and a headset jack. There are two full-sized USB 2.0 ports on the sides of the keyboard.

For the price, the Satellite Click 10 isn’t a bad little device. But if you were hoping for a great keyboard, more than 2GB of RAM, or super-speedy WiFi, you won’t get it here.