The Kurio Smart is a 2-in-1 Windows tablet aimed at kids. It has a bright blue and white design, a sturdy (but not particularly rugged) case design, and a detachable keyboard which lets kids use the 8.9 inch computer as a touchscreen tablet or as a little notebook.

Toys R Us recently began offering the Kurio Smart for $200, and I was kind of intrigued by the value proposition: the price includes a 1-year subscription to Office 365.

But after spending a little time with the tablet, I think parents might be better off just buying an Asus Transformer Book T100. Refurbished models of that 10 inch 2-in-1 sell for as little as $135 after rebate. 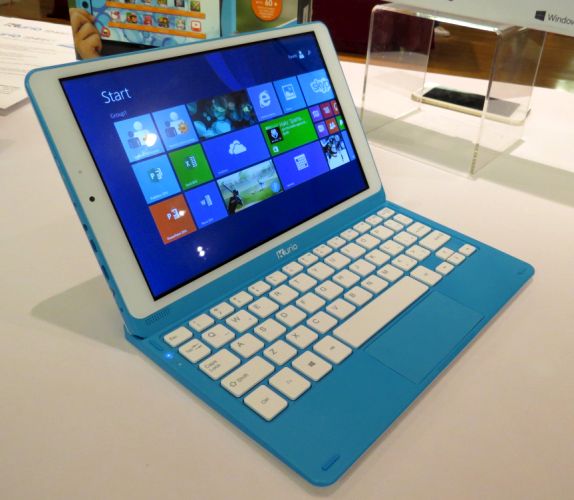 It features a micro USB port, micro HDMI port, a headset jack, and the tablet ships with Windows 8.1 instead of Windows 10.

Update: Kurio tells me that units produced after September will ship with Windows 10, and anyone that buys a Windows 8.1 model can upgrade to Windows 10 for free.

The company also points out that the tablet comes with “$200 worth of kid-friendly apps and games.”

The tablet itself isn’t bad. It’s reasonably responsive, has an IPS display with decent viewing angles, and feels pretty light and easy to grip.

But the keyboard accessory is awful. Not only are the keys incredibly tiny (which might be alright if you’re an 8-year-old with small hands), but the touchpad is almost too small to really use and the layout of some keys is just odd: for instance you need to hit Fn+L in order to get an apostrophe.

On the bright side, the magnets that hold the keyboard and tablet together a very strong. You have to pull pretty hard to separate the tablet from the keyboard, and you can even hold the computer from the tablet section without the keyboard falling off (or vice versa).

Still, when you can buy a much better tablet like the Asus Transformer Pad T100 for around the same price or less, I’m not sure why you’d spend $200 on a Kurio Smart. Of course, that Asus tablet is nearly two years old and eventually stores will run out of stock. But there are plenty of other 10 inch 2-in-1 tablets with better keyboards than the Kurio Smart’s on the market. And the newer Transformer Book T100HA with a Cherry Trail processor is also coming soon for $299.