Brillo is Google’s new operating system for low-power, Internet of Things (IoT) devices. It’s based on Android, which should make it relatively easy for developers familiar with Android to work with Brillo. But it’s a stripped down version of Android designed for low-power, inexpensive devices with as little as 32MB of RAM and 128MB of storage.

Google unveiled Brillo in May, and now the company is allowing some developers to start working with the platform: a Brillo developer portal is now live, but you’ll need to request an Invite before you can get started. 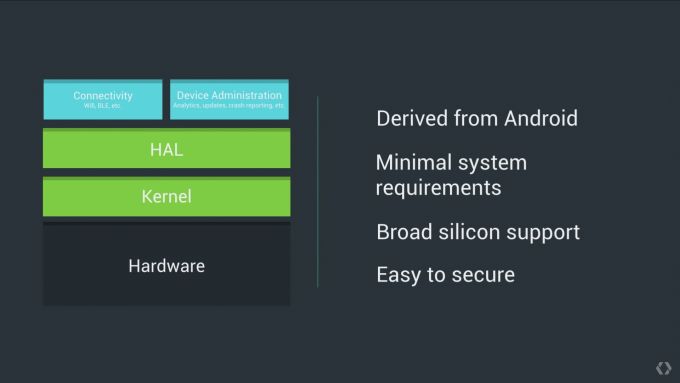 Google says Brillo supports devices with ARM, Intel x86 and MIPS processors. While it should work on a wide range of devices, Google will also recommend featured development boards that are verified to support Brillo.

The operating system is open source, and Google releases updates every 6 weeks, along with LTS (long term support) releases every six months.

Brillo is designed to work with Weave, a new communications protocol for IoT hardware, allowing devices to talk to one another and to work with mobile apps for smartphones and tablets.

Google’s Brillo developer kit is based on Ubuntu 14.04 and Android development tools including adb.

So what kind of “things” is this Internet of Things stuff that Brillo will run on? It could include anything from smart light bulbs that you can control or automate using a smartphone app to home security cameras or motion sensors, weather stations, baby monitors, door locks, or other internet-connected hardware including music players.