There are dozens of smartwatches on the market, including some models that have barebones features and others that have a kitchen sink approach to hardware that includes a bunch of features you might never use.

Blocks is a modular smartwatch project that lets you basically design your own smartwatch. Buy a core module with basic functionality and swap out modules to add sensors, batteries, or other components. 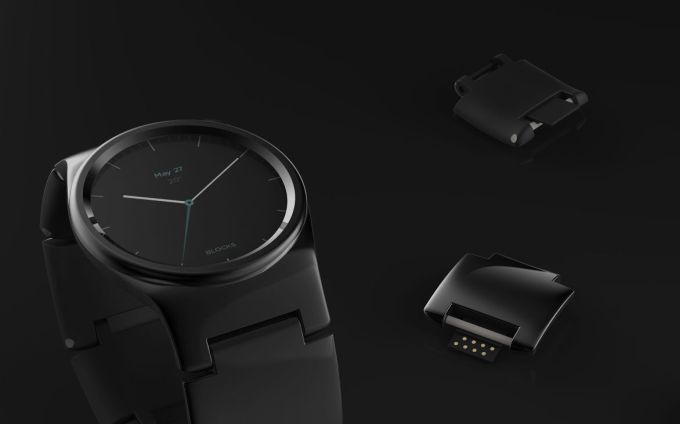 Not only does this let you design your own watch, but it also lets you change it on the go. Only need a day or two of battery life today, but want to power up when you go on an out-of-town trip? Just add an extra battery or two.

Blocks has been showing off concepts and prototypes for a while. Now the company is getting ready to take your money. A Blocks Kickstarter campaign will begin on October 13th.

I spoke with members of the Blocks team a little while ago, and got a few details about the project.

The core module will include basic functionality including a Qualcomm Snapdragon 400 processor, Bluetooth, WiFi, a motion sensor, and a microphone for voice recognition. The watch will run an operating system based on Android Lollipop, but it’s not Google’s Android Wear software.

At launch, the watch will likely have a round color OLED touchscreen display. Want an E ink screen? If there’s enough interest, then an ePaper version might be available at a later time. The team is also working on a cellular model that will let you add a SIM card for mobile voice and data features.

So what about the modules? Blocks expects to produce modules that will add features including GPS, heart rate sensors, NFC for contactless payments, and batteries. The modules will be hot swappable, and since the modules basically make up the wrist strap, you’ll be able to fit around 4 or 5 on a watch.

Don’t need all those modules? You can just put a dummy module in an empty position so the watch doesn’t look funny.

The last I’d heard, Blocks was expecting to ask for pledges of about $250 for a watch plus 4 modules. There may be other pledge levels available. The retail price will probably be a little higher.