Amazon’s new Fire tablet has been getting a lot of attention thanks to its $50 price tag. While the 7 inch tablet doesn’t have stellar specs, the hardware’s not awful and the price is hard to beat. But what if you don’t want to be locked into Amazon’s app and media ecosystem?

Sure, you can install apps like Netflix and HBO Go if you’d prefer to get your videos from non-Amazon sources. But if you really want to open up the tablet, you might want to install the Google Play Store, which offers access to hundreds of thousands of Android apps.

It turns out it’s pretty easy to do that… and you don’t even need to root the tablet. 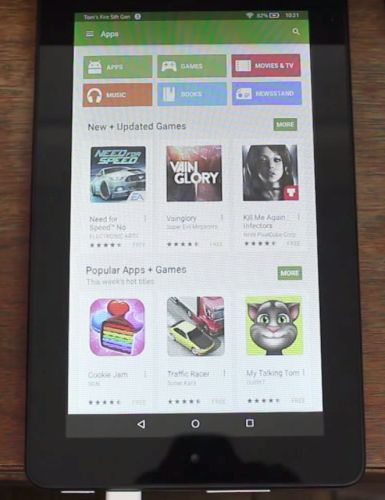 Basically it requires connecting the tablet to a Windows PC and running a batch file that will connect to the tablet via adb and load all of the necessary apps and files. After that’s done, you’ll want to wait about 10 minutes before doing anything, so that the Google services app automatically updates.

If you’d prefer not to use a script, there are also instructions for doing things manually, by installing a series of apps including the Services Framework, Google Account Manager, and Google Play Store.

Rootjunky has also posted a video showing the install process:

Not only will this let you download and install third-party apps from the Play Store, but the framework will let you run other Google apps that wouldn’t otherwise work on an Amazon tablet, including Gmail, Google Chrome, and the official YouTube app.

None of this is officially supported by Google or Amazon, so you may run into some problems. Google’s Inbox email app, for instance, reportedly does not work.

Still, it’s nice to know that you can kind of transform Amazon’s $50 Fire tablet into a full-fledged Android tablet without rooting the device or installing a custom ROM. Or at least you can for now… there’s no telling if Amazon will block support for Google services in a future software update. So you might want to find a method for disabling over-the-air updates.