Want to stream Amazon Prime Video to your TV? You can buy a Smart TV with the feature baked in or pick up a Roku, Amazon Fire TV, or other supported device. But you can’t use an Apple TV, Google Chromecast, or Google Nexus Player because none of those devices work with Prime Video.

Whose fault is that? Largely Amazon’s: the company could release apps for those platforms, but it hasn’t done so. Now it looks like Amazon has no plans to add support for Apple TV, Chromecast, or the Nexus Player.

How do we know? Because the company is reportedly sending notices to vendors letting them know that as of October 29th, it will no longer let them sell any of those devices through Amazon. 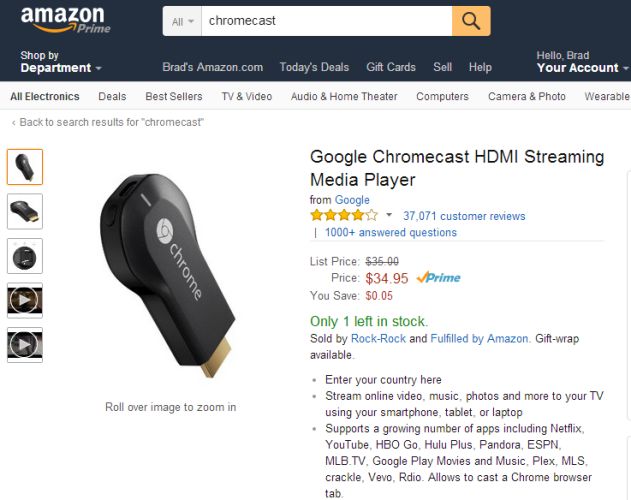 The reason for the move is allegedly that “it’s important that the streaming media players we sell interact well with Prime Video in order to avoid customer confusion.”

You know, because people might be confused if they bought a media streamer from an online store and found out that while it can stream content from Netflix, YouTube, Hulu, and hundreds of other sources, it’s missing one.

Again… let’s point out the obvious: the only reason these devices don’t support Prime Video is because Amazon hasn’t worked with Google or Apple to enable support.

Overall, this move just seems odd. I would understand if Amazon only wanted you to buy its own Fire TV and Fire TV Stick products, but Amazon will continue to sell Roku, Xbox, or PlayStation products… all of which work with Prime, and all of which are ostensibly competing with Amazon’s hardware.

Amazon also tends to sell hardware in order to sell content. Its eReaders, tablets, and TV boxes are so cheap that the company doesn’t make much of a profit from them. Instead, it hopes customers will be more likely to buy apps, music, books, videos, and games when they’re using Amazon devices. But another approach is to make sure your app works across all sorts of hardware, and Amazon generally follows that approach: the company offers a number of Android, iOS, and Windows apps.

Anyway, I was a bit skeptical of this report when someone posted the letter on reddit last night. But now Bloomberg has picked up the story, giving it a little more credibility and Variety received confirmation from an Amazon spokesperson.

Wondering why you can still find Amazon listings for Chromecast, Nexus Player, and Apple TV devices on Amazon? According to the letter sellers can no longer create new product listings, but existing product pages won’t be removed until October 29th.