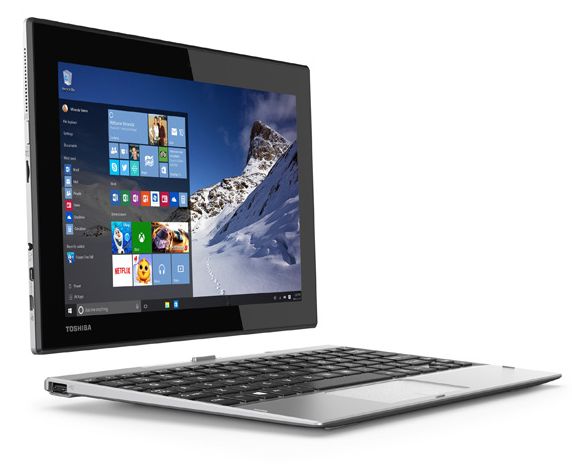 The Satellite Click 10 tablet features 802.11a/g/n WiFi, Bluetooth 4.1, and a 22.5 Whr battery. There’s an 8MP camera on the back of the tablet, with auto-focus support, and a 2MP fixed-focus, front-facing camera, along with dual microphones for use with Cortana, voice or video calling, or other functions.

The tablet ships with Windows 10 and support Microsoft’s Continuum software which lets you automatically transition from a tablet user interface to a notebook UI when you attach the keyboard dock.

Speaking of the keyboard dock, in addition to QWERTY keys, it features a touchpad and two USB 2.0 ports. The tablet itself has a micro HDMI port, a USB 2.0 port, and a memory card reader.

Toshiba first unveiled the Satellite Click 10 in July, although for a while it looked like it would be called the Encore 10 in the United States.