Qualcomm’s upcoming Snapdragon 820 processor will be the first chip based on the company’s new Kryo architecture, and the chip maker says the new technology is both faster and more efficient than the company’s most powerful chips to date.

In fact, Qualcomm says the Snapdragon 820 will be offer up to twice the performance of a Snapdragon 810 processor, while offering twice the power efficiency. 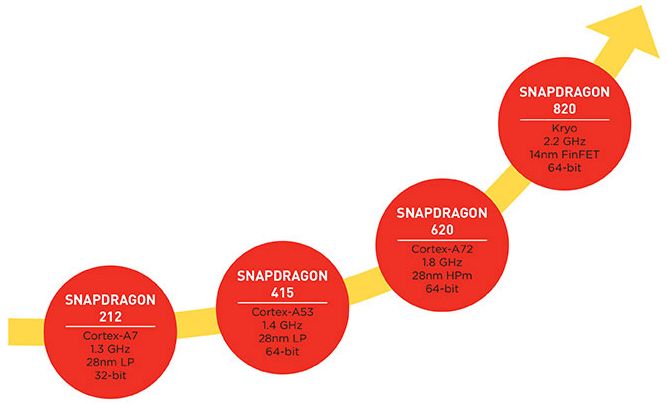 This isn’t a new thing for Qualcomm. Up until recently, the company had a habit of utilizing its own custom cores for Snapdragon chips. But Kryo wasn’t ready to go by the time Qualcomm wanted to make the jump from 32-bit to 64-bit processors, which is why the Snapdragon 808 and 810 chips used ARM designs.

Kryo is a 14nm, 64-bit CPu with support for speeds up to 2.2 GHz. It’s designed to work with Qualcomm’s Adreno 530 graphics and Hexagon 680 digital signal processor.

Qualcomm says it uses heterogenous computing, to leverage different core functions including CPU, GPU, and DSP depending on what it is your phone needs to do, enabling better performance and lower power consumption. The new Qualcomm Symphony System Manager is in charge of figuring out which processors should be assigned which tasks.