Before Google launched Android Wear and Apple introduced the Apple Watch, a startup called Omate was developing its own smartwatches running a stripped-down version of Google Android.

Now Omate is back, and this time the company is offering its most powerful smartwatch yet. The Omate TrueSmart+ has a 1.54 inch, 320 x 320 pixel display, 1GB of RAM, 8GB of storage, and it runs Google Android 5.1 Lollipop. 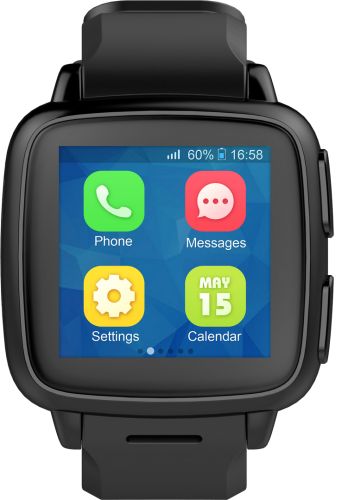 The Omate TrueSmart+ is basically a watch-shaped phone. It even has a micro SIM card slot and support for 3G connectivity.

Of course, Android was developed for smartphones and tablets, not for watches. So Omate developed a custom user interface called OUI which makes the launcher, settings, and other features a bit easier to navigate on a watch-sized display.

Since the TrueSmart+ runs the full version of Android rather than Android Wear, it can support many apps which may not be available for Google’s wearable platform. But you can’t access the full Google Play Store on the watch. Instead you can search for watch-friendly apps in the Ostore app store.

Worried that running Android instead of Android Wear will run down the battery quickly? Yeah, it probably would… but Omate gave the TrueSmart+ a 700 mAh battery, which is about twice the size of a typical smartwatch battery.

Other features include a 1 GHz MediaTek MT6572M dual-core processor, WiFi, Bluetooth, GPS, motion sensors, a microphone and a speaker.

Omate is taking pre-orders for the TrueSmart+ for $169 and says the watch should ship in November.

Want something a tiny bit cheaper? The Omate TrueSmart-i is also up for pre-order. This model ships in October, features a 240 a 240 pixel display, a 600 mAh battery, Google Android 4.4, and a 5MP fixed focus camera.

9 replies on “Omate TrueSmart+ is a watch that runs Android 5.1”