Apple is launching the biggest update to its Apple TV lineup in years. The new Apple TV is still a small box that you can stick next to your TV to stream music or videos from iTunes or third-party services.

But Apple TV can now also run third-party apps and games thanks to its new tvOS and the integrated App Store, and Siri integration means it can respond to voice commands just like an iPhone, iPad, or Apple Watch now. 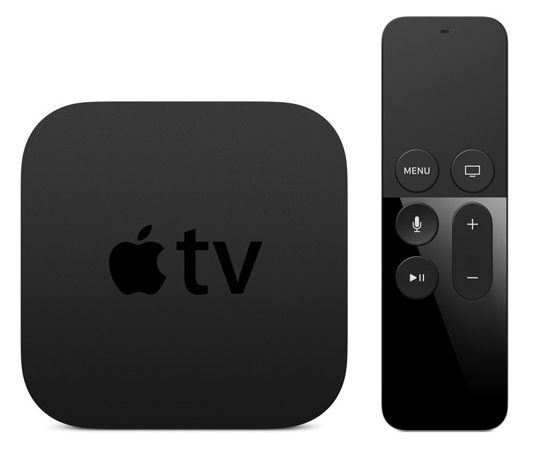 The new Apple TV also has more raw horsepower than its predecessor… which isn’t surprising, since the last time Apple updated its Apple TV hardware was more than two and a half years ago.

The new box features an Apple A8 processor, support for 802.11ac WiFi (as well as Ethernet), and a new remote control with a built-in glass touchpad for navigating the Apple TV user interface or play games. An accelerometer also lets you use the remote as a motion controller.

Apple’s new TV box features 2GB of RAM and 10/100 Ethernet — which means if you have a decent 802.11ac WiFi router, you’ll probably get faster network speeds through a wireless connection than through a wired one.

Want to play games that require a few more buttons and tactile feedback? You can turn the remote sideways to use it as a game controller, and the new Apple TV also supports Bluetooth game controllers.

The top portion of the remote also doubles as a trackpad, and there’s also a microphone in it. Tap a Siri button to activate Apple’s voice assistant software and you can ask questions, search-by-voice, or perform other actions without pressing  a bunch of buttons to flip through menus. If you missed some dialog in a show you’re watching, just ask Siri “What did he/she say?” and the video will automatically jump back a few seconds so you can re-watch the scene and see it with captions.

Don’t need all those extra features? You don’t have to pay for them. While the new Apple TV sells for $149 and up, you can still pick up the older model for $69. It’ll just have a slower processor and it won’t support all of the features available on newer hardware, such as Siri.

One thing that neither device will support? 4K video. If you want to stream ultra HD content to your TV using an Apple device, you’re going to need to plug your laptop into your TV until Apple gets around to updating the hardware again.

You also might want to opt for a different solution if you’d prefer to watch downloaded videos rather than online video: the new Apple TV still doesn’t have a lot of built-in storage. It’s designed to be first and foremost a media streaming device. As for apps and games, it should have enough space to run the kind of apps it supports… because Apple TV apps can only be up use up to 200MB of static resources. Additional data can be downloaded and cached on demand if they’re needed.

It’s worth noting that the new Apple TV has to compete with a growing number of internet video streaming boxes from competitors, ranging from super-cheap models like the $35 Google Chromecast and $39 Amazon Fire TV Stick to higher-priced options like the $99 Amazon Fire TV and $200 NVIDIA Shield TV.

While the Apple TV relies on iTunes, the App Store, and Siri, there’s really not much that you can do with an Apple TV that you can’t also do with one of those other devices… at least not yet. That could change in the future though: Apple’s expected to launch its own subscription-based internet video service, and it’s likely to be available exclusively to users of Apple products, at least initially.

Whether it’ll offer compelling content or pricing that’s not also available to Roku, Android TV, or Fire TV users remains to be seen.

3 replies on “The new Apple TV has an app store, Siri support”