So you’ve got an airplane trip coming up and you want to load some videos on your phone or tablet to make the flight a bit more bearable. You could rip a DVD or two or rent or purchase a title form Google Play or iTunes and save it to your device.

But now there’s another option: If you’re an Amazon Prime member, you can download some videos from the company’s subscription-based service for offline viewing. 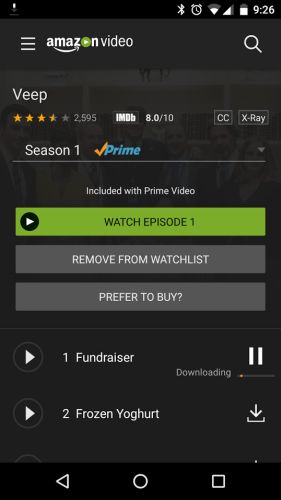 Up until now the only devices that supported downloads of Amazon Prime Video were Amazon Fire products. Now you can download movies and TV shows on iPhones, iPads, and Android devices.

Amazon says downloads are available in the US, UK, Germany, and Australia. You just need the latest version of the Amazon Video apps for Android or iOS.

If you’re wondering how much storage space videos are going to take up on your device, I downloaded a 30 minute episode of Veep, which used about 162 MB of space. Movies and longer TV shows will eat up more storage.

Amazon is the first major internet video subscription service to offer downloads for iOS and Android. It’s not something offered by rivals Netflix or Hulu.

6 replies on “Download Amazon Prime Videos on Android and iOS”