Xiaomi’s Mi Box Mini is a ridiculously tiny TV box. Xiaomi launched the little box earlier this year as a cheap, small device for streaming internet video to your TV.

The Mi Box Mini is about the size of a small USB charging brick for a smartphone. Just plug the prongs into a power strip and connect an HDMI cable to the box and it’ll show Xiaomi’s smart TV software on your display… if you’re in China. The Mi Box Mini isn’t much use for folks outside of that country.

But now there’s a Mi Box Mini clone designed to be used just about anywhere. It’s called the CX-S500 and it sells for around $45 to $50 at Geekbuying, and Bangood. 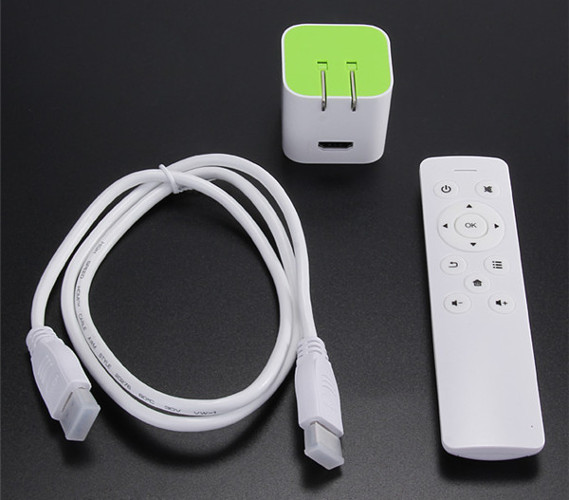 The little box is about the same size as a Mi Box Mini, but it runs a  standard version of Google Android 4.4 rather than Xiaomi’s MIUI software. Other features include an Amlogic S805 quad-core ARM Crotex-a5 processor with Mali-450 graphics, 1GB of RAM, 8GB of storage, an HDMI port, 802.11b/g/n WiFi, and Bluetooth.

Like the Mi Box Mini, the box comes with a remote control and HDMI cable. In fact, the remote looks remarkably similar to the official Xiaomi model.

Unlike the actual Mi Box Mini, the CX-S500 also has a USB port, allowing you to connect a keyboard, mouse, storage device, game controller, or other peripherals.

With a different processor, more storage, and a different version of Android than the actual Mi Box Mini, the CX-S500 is clearly a very different product than Xiaomi’s offering… but it has the same super-small design for folks that place a higher value on that sort of thing than the expansion options that come with a larger device with room for additional ports for USB, Ethernet, and audio devices.