Researchers at the University of California San Diego are working on a wireless transmission system that uses the human body’s magnetic waves to send a data signal to a device.

“What’s that, again?” you might be thinking. You’ve read it right. The research team has already created a proof of concept prototype to send transmissions from one device, across a person’s body, and to a second device.

The technology could one day provide an alternative to Bluetooth for sharing data between a smartphone and smartwatch, or other wearables. 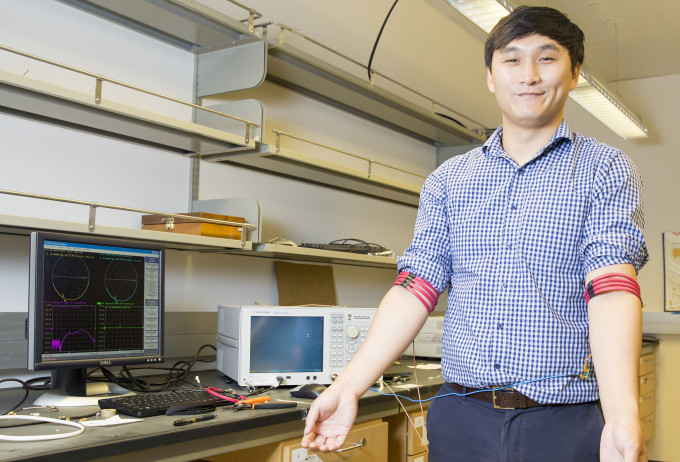 Right now the device that’s receiving information is a coil of wires, but the concept works.

The researchers say data transmissions between devices via Bluetooth suffer from path loss because they pass through the air and gets caught by objects that get in the way. Bluetooth devices must have a strong power output capable of sending a signal that can push through the obstacles and offset for this loss.

The human body transmission technology overcomes the need for a strong power output because the wave travels from one part of the body to another through magnetic waves. The research team estimates that path loss from their transmission system is 10 million times lower than Bluetooth.

“A problem with wearable devices like smart watches is that they have short operating times because they are limited to using small batteries,” said UCSD electrical engineering Ph.D student Jiwoong Park. “With this magnetic field human body communication system, we hope to significantly reduce power consumption as well as how frequently users need to recharge their devices.”

As cool as the concept behind this technology is, its practical application in real life is far off. We often hear about research on new technology that could potentially change the world, but rarely see it in come to completion.

While it might be neat to have a fitness-tracking t-shirt that sends lossless data to a smartwatch in less than a second, it could be years before we see real-world applications of the technology, if we ever do.

4 replies on “New tech transmits wirelesss signals via your body”