Later this year Apple is expected to launch its second app for Android, and that one’s kind of a big deal: Apple Music is the company’s new subscription-based music service that takes on Spotify, Google Play All Access, and Rdio with on-demand music and live radio stations.

It’ll be the first service from Apple explicitly designed for folks with Android phones and tablets.

But the company’s first Android app is already here… and it’s designed to get you to stop using Android. The Move to iOS app is a migration assistant that helps you transfer your Android data to an Apple account. 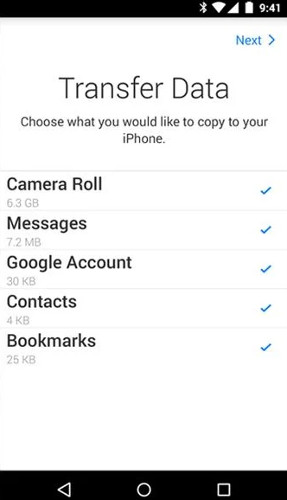 Move to iOS is available form the Google Play Store, and it’s designed to let you save photos from your camera roll, instant messages, contacts, bookmarks, and Google account data to Apple’s iCloud service.

Then you can login to your Apple account on an iPhone or iPad and your files and data should be downloaded automatically.

In what’s either a subtle dig at the quality of Android devices, or an honest assessment that you probably won’t need your old phone once you start using a new one, the screen that’s displayed after your data is transferred lets you know that you can recycle your device by bringing it into an Apple Store.

Anyway, while it’s interesting that Apple’s first Android app is one that makes it easier to move from Android to an iPhone, it’s also noteworthy that Apple has finally released any app for Android. Google has been making software for iPhones for just about as long as there have been iPhones.