Acer is expanding its Revo line of tiny desktop computers with a new model that starts small… but can get bigger if you need more power.

The Acer Revo Build series is a modular mini-desktop that will be available in Europe, the Middle East and Asia in October for a starting price of €199 in Europe.

Acer does plan to offer the Revo Build in the United States, but pricing and availability haven’t been announced yet. 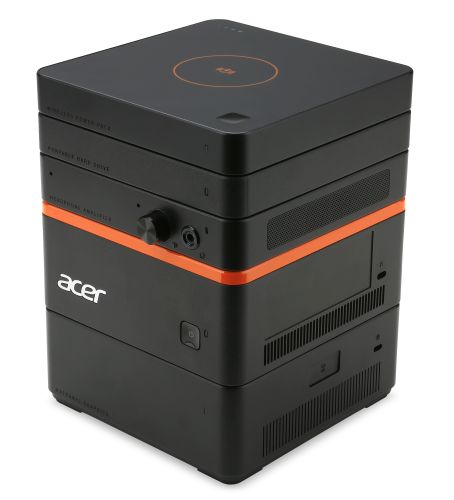 Blocks connect to one another through pogo pins with magnetic alignment, so there are no cables required to add a block. At launch, Acer plans to make Blocks with 500GB and 1 terabyte portable hard drives available.

Future modules will include features such as an Audio Block with built-in speakers and a microphone, a wireless power bank, a projector Block, and even an external graphics Block with an AMD graphics card.

The guts of the computer are in the base station, which features 32GB of eMMC storage, up to 8GB of RAM, and an Intel Celeron N3050, Celeron N3150, or Pentium N3700 Braswell processor.

The system ships with Windows 10 software and features three USB 3.0 ports, HDMI and DisplayPort, a headset jack, and an SD card reader.

Acer says it’s easy to upgrade the Revo Build’s memory by loosening a single screw to open up the case.

7 replies on “Acer Revo Build is a modular mini PC”