Samsung is holding an event on August 13th where the company is expected to unveil the Galaxy Note 5. But the company may also introduce another phone, called the Galaxy S6 Edge Plus.

We got our first look at the phones when Evan Blass posted a leaked picture last week. Now he’s shared another image showing an odd little accessory: a keyboard that clips onto the bottom of the Galaxy S6 Edge. 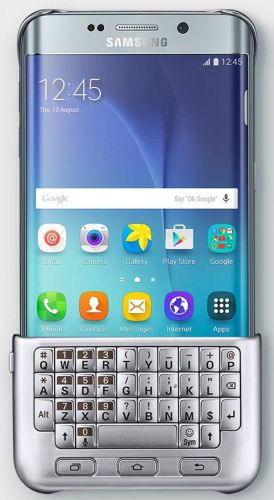 The Edge 6 Plus is expected to have the same basic specs as the Galaxy 6 Edge, but it’ll have a roughly 5.7 inch display instead of a 5.1 inch screen.

The clip-on keyboard looks like something out of smartphone history, complete with thumb-sized QWERTY keyboard, designated number keys that you can use to dial phone numbers, and special character keys.

There are also a few modern touches including a microphone icon, emoticon button, and home, back, and recents buttons below the keyboard.

Basically it looks like a phone for someone that would prefer a classic BlackBerry or Palm Treo-style phone if only those devices ran Android Lollipop.

via Cult of Android