NVIDIA has unveiled a new set of features coming to GeForce Experience that will let gamers with recent NVIDIA graphics cards record gameplay or stream it over the internet. 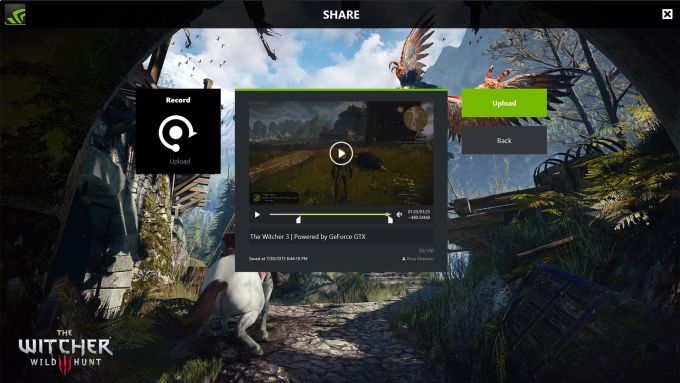 When playing a Windows PC game, you can hit the Alt+Z keys to bring up a new Share menu that includes Record, Stream, Broadcast, and Instant Replay buttons.

Replay creates a DVR-style buffer that automatically saves the past 5 to 20 minutes of video gameplay, letting you tap a button to rewatch something after it’s happened.

The Record option lets you manually record gameplay for later viewing or for uploading to the internet — and there’s a new tool that lets you upload videos to YouTube without even exiting a game.

Broadcast, meanwhile, lets you stream a game live to Twitch while adding a camera or voice feed to your video at the same time.

Want to show a game to a friend and don’t want to wait for that person to show up at your house?

GameStream Co-op is a new feature that lets you load up a game on your computer and stream it over the internet to another user. That person can watch you play, take over control of the game remotely, or play multi-player games with you as if they were sitting in the same room. 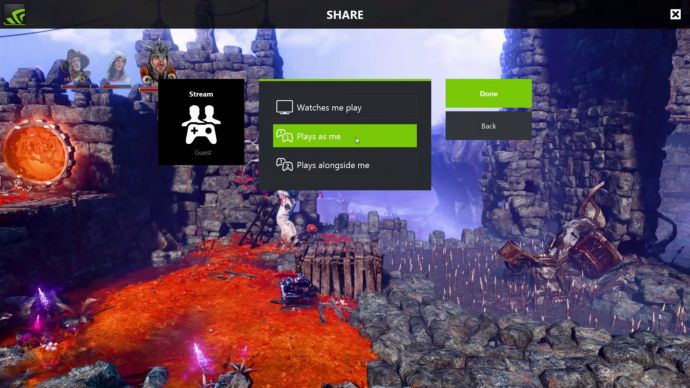 This makes it possible for multiple people to play games that support local multi-player mode, but which don’t already have built-in support for online multi-player gaming.

It also means that only one person actually needs to own the game. The remote player will be viewing the game as it streams over the internet from your PC.

There may be a little latency, depending on your hardware and internet connection. But the system should work just about as well as NVIDIA’s existing GameStream technology which allows users to stream games over the internet from NVIDIA’s servers.

GameStream Co-op includes support for voice chat so you can talk trash while you play together.