Microsoft is launching a new low-cost phone with a web browser, support for Facebook, Twitter, Skype GroupMe, and Messenger, and with a 2 megapixel camera. But the new phone isn’t running Windows software, and it doesn’t even have the Microsoft name on it.

Instead, the new phone is called the Nokia 222 and it should be available in select markets starting in September for about $37. 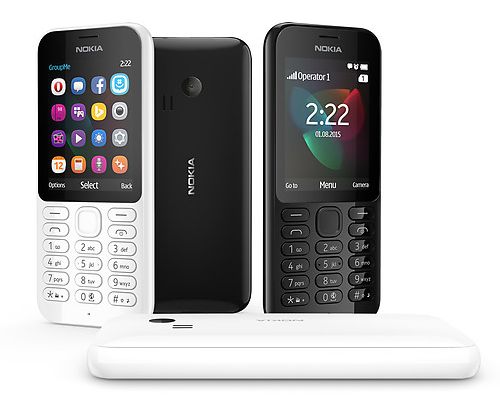 Microsoft acquired Nokia’s phone business last year, and for the most part the company has leveraged Nokia’s hardware expertise to launch new Lumia smartphones running Windows software. But this isn’t the first low-cost, candybar-style device Microsoft has released under the Nokia name… it’s just potentially the best to date.

The Nokia 222 is aimed at customer in developing markets, where a simple, inexpensive phone with long battery life could be more valuable to some customers than a full-fledged smartphone. But the Nokia 222 has some smart, feature-phone style capabilities.

It runs Nokia Series 30+ software, sports a 2.4 inch, 320 x 240 pixel display, and support for SLAM technology, allowing you to send files to another user just by bringing two devices together.

Remember when phone battery life was measured in days rather than hours? Unlike most modern smartphones, this type of device can run for days at a time between charges.

The Nokia 222 will be available in single-SIM and dual SIM varieties. Both models are fairly basic phones, with just 16MB of RAM, a microSD card with support for up to 32GB of removable storage, a fixed-focus camera that can shoot 2MP pictures or capture QVGA videos at 15 frames per second, and support for GSM 900/1800 MHz networks with top speeds of up to 236.8 kpbs.