Samsung’s new Galaxy Note 5 smartphone has a big screen, a speedy processor, and 4GB of RAM. But what really makes it stand out from most phones on the market is the S Pen, which lets you write or draw on the screen or perform other actions.

Unfortunately, it looks like the Galaxy Note 5 has a major design flaw: There’s a slot in the phone where you can store the pen when it’s not in use, but it’s easy to slide the S Pen into the phone the wrong way, causing the pen detection mechanism to fail, or even worse, causing the stylus to get permanently stuck.

Android Police published a video showing how easy it is to replace the stylus backward into its slot. During the video, the S Pen gets jammed and seems to get permanently stuck inside.

The flaw stems from the fact that the stylus requires no resistance when inserted backward. The pen has the same thickness throughout. It even clicks into place, as seen in Android Police’s video.

But if the pen is inserted backward, the spring mechanism that holds the S Pen in place grabs onto the blunt end of the stylus, making it very difficult, if not impossible, to remove.

Even if you can successfully remove the stylus, both Android Police and Ars Technica report that the pen detection feature (an alert sound and vibration) stopped working. Ars Technica noted that the feature began working again after mucking about with it a couple of times. However, Android Police’s pen detection feature never worked properly again.

By comparison, Android Police points out that Samsung’s Galaxy Note Edge has an S Pen that cannot be inserted backward without force. The blunt end of the stylus is slightly larger than the pointed end. It is not likely that a user would accidentally slide it in the wrong way.

So what’s Samsung doing about the problem? Not much. 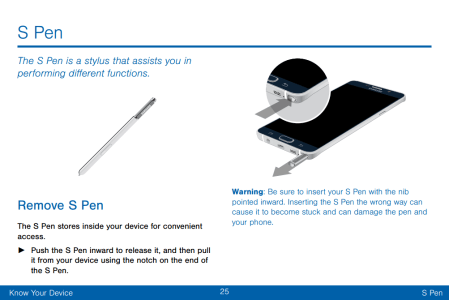 Samsung is already aware of the issue, and even included a warning (on page 25) of the user manual, as noted by The Middle Ground (via reddit).

Warning: Be sure to insert your S Pen with the nib pointed inward. Inserting the S Pen the wrong way can cause it to become stuck and can damage the pen and your phone.

When asked for comment, a Samsung representative told the BBC that the company recommends users “follow the instructions in the user guide.”

So it doesn’t sound like there are any plans to update the hardware.