A new connected wearable has recently appeared in the crowdfunding market. It’s called the iBackpack and it pretty much has everything. Built into the design is an external battery pack, four USB charging ports, a microUSB cord, a Bluetooth speaker, a GPS tracker with an anti-theft alarm, and a Wi-Fi hotspot. 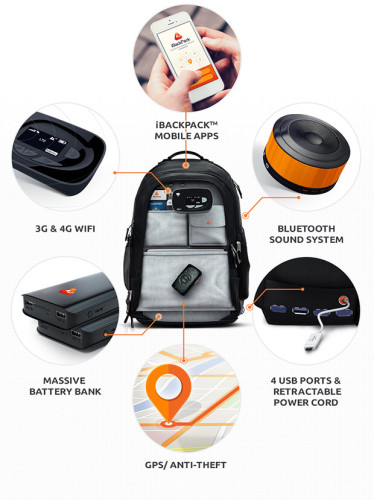 In an age where most of us already have such gadgets lying around the house, it is interesting to see how popular the iBackpack is. The IndieGoGo campaign has already received more than five times its funding goal.

Remember the Coolest Cooler? It broke the Pebble Watch’s record on Kickstarter for being the most funded campaign on Kickstarter. The campaign ended with $13 million raised.

The iBackpack, with 48 days still remaining, has already raised nearly $270,000. It may never reach the heights that the Coolest Cooler did, but it is clear that consumers want these connected contraptions.

In the case of the iBackpack, one could literally just stuff a bunch of accessories that they already have into their bag and walk out the door with the same connected wearable without spending a couple of hundred extra dollars.

Even the Wi-Fi hotspot is already available on most smartphones. As for the anti-theft device, you could find one on Amazon for about $30, on average.

So, why is this $199 (it will retail for $299) backpack so popular? Maybe, it’s because you don’t have to put it together yourself. Maybe the convenience is worth the price. Maybe, we are all technophiles with FOMO (fear of missing out) and want to be the first on the block with the newest gadgets.

You can pledge to the iBackpack crowdfunding campaign through mid-October for a base cost of $199. Or, you can pledge as little as $99 for a lower-end model that comes with less battery power and no Wi-Fi hotspot. Shipping is expected for March of 2016.