Google is expected to launch two different Nexus smartphones this year, with LG building a model with a 5.2 inch display and Huawei partnering with Google on a 5.7 inch model. We’ve already got a pretty good idea of what the smaller model will look like, thanks to a leaked photo.

Now it’s time for the Huawei Nexus 6 to get share the spotlight. 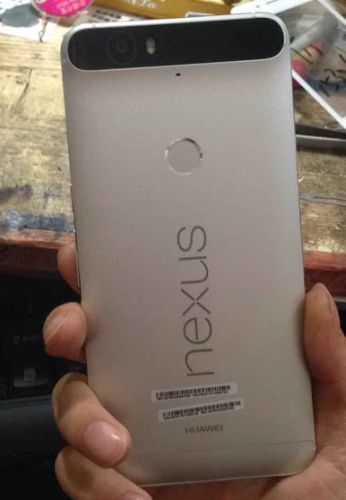 A series of leaked photos were posted to Twitter and Google+ by Tiessen Fu, showing a phone with the Huawei and Nexus labels on the back, as well what looks like a fingerprint scanner on the back of the phone.

The phone appears to be pretty slim, but there’s a bump along the top edge where the camera is located, suggesting the phone could have some high-quality camera hardware.

Meanwhile, @Onleaks has uncovered a photo of the phone’s bootloader, showing that it appears to feature 3GB of RAM and a Qualcomm Snapdragon 810 processor (although I wouldn’t rule out the possibility that the phone could ship with different hardware, possibly including more RAM).

We’ll probably know whether the leaked photos of the 2015 Nexus 6 and Nexus 5 smartphones are real in a month or two. Google is expected to launch Android 6.0 Marshmallow this fall, and it seems likely that the company could introduce its latest Nexus phones at around the same time, since they’ll likely ship with the latest version of Android.