Now Hardkernel has a new model with the same basic specs and a few key improvements. The ODROID C-1+ is now available for $37. 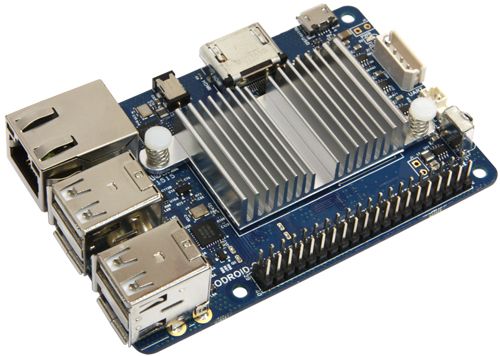 So what’s new? The little computer has a full-sized HDMI port instead of a micro HDMI port, comes with a heat sink on the board, has an I2S bus for HiFi audio add-on boards, and supports CEC functions without an RT backup battery.

Hardkernel says the new model also has improved SD card compatibility and a power path from the USB OTG port so you can charge either with a USB cable or a DC power cable.

Features that haven’t changed include 1GB of RAM, a microSD card slot, support for up to 64GB of eMMC storage, Gigabit Ethernet, four USB 2.0 ports, a micro USB port, a 40-pin header that’s compatible with Raspberry Pi accessories, and a compact design: the system measures just 3.4″ x 2.2″ and weighs about 1.4 ounces.

The system supports Android and Linux.

via CNX Software and ODROID forum