Asus is updating its EeeBox line of small desktop computers with a new model sporting an Intel Celeron N3150 “Braswell” quad-core processor and a fanless design.

The EeeBox E410 also supports up to two displays, 4K video playback, and the desktop should be available soon. 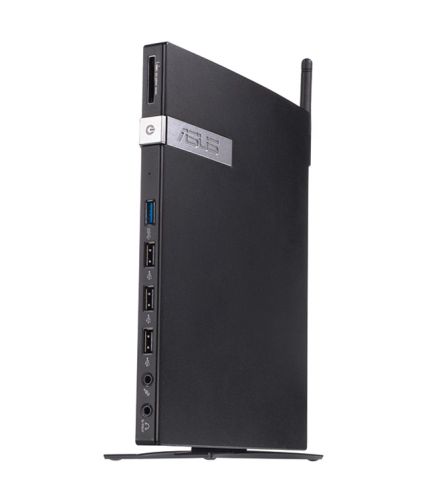 Asus introduced the first EeeBox in 2008, when it was marketed as a low-cost, small form-factor desktop with specs similar to those you would find in a netbook. Over the years, Asus spruced up the EeeBox family every now and again with more powerful hardware, while the Eee PC line of netbooks faded into history, but for the past few years the company’s EeeBox mini-desktops have been sold as commercial products rather than consumer devices.

That said, the new model does look like it’d make a decent low-power desktop. It supports up to 8GB of RAM, up to 1TB of hard drive storage or up to 128GB of solid state storage, features HDMI, VGA, and Ethernet jacks, and has mic, headphone, two USB 3.0 and two USB 2.0 ports. There’s also a Serial port and an external antenna and the system supports Gigabit Ethernet and 802.11ac WiFi.

The little computer measures 8.6″ x 6.8″ x 1.1″ and weighs 1.5 pounds and it comes with a VESA mount kit that lets you attach the system to the back of a display.