As expected, it looks like Toshiba is planning to launch a new 2-in-1 Windows tablet with a 10 inch display. What’s slightly less expected is that the Toshiba Satellite Click 10 appears to have specs that almost make it competitive with Microsoft’s Surface 3 tablet… but the Click 10 will have a lower price tag than Microsoft’s entry-level Surface.

Update: Toshiba is now selling the Satellite Click 10 for  $350 and up. 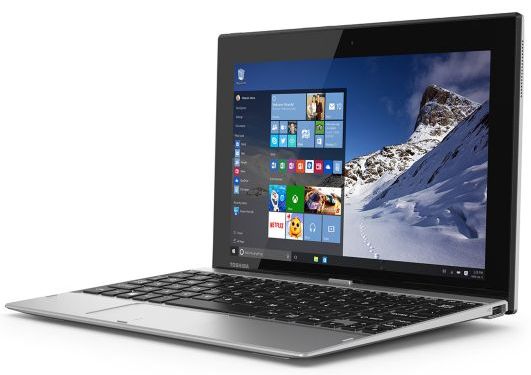 Clearly, the Surface 3 has better specs… but Microsoft charges an extra $130 for a keyboard cover. The Toshiba Satellite Click 10, on the other hand, is expected to sell for around $449… and that price includes a keyboard dock.

Other features include 2GB of RAM, 64GB of storage, Bluetooth 4.1, an 8MP rear camera, a 2MP front camera, a micro HDMI port, micro USB 2.0 port, an SDXC card reader, stereo speakers, and a headset jack. There are also two full-sized USB 2.0 ports on the keyboard dock.

The Satellite Click 10 weighs about 2.4 pounds when used with a keyboard dock.

via WinFuture and QVC