Smartphone makers keep trying to cram better cameras into their phones. But even phones with 20 megapixel sensors, quick shutters, and wide angle lenses can only take you so far. There’s just not enough room for a large image sensor or a high quality optical zoom lens in most smartphone cases.

So some companies including Sony, Oppo, and Kodak have introduced clip-on cameras that you can attach to a smartphone and pair with a wireless connection to snap higher-quality images than you’d get using your phone’s built-in camera.

Now Olympus is getting in on the action with the Olympus Air A01. But this camera is a bit different, since it supports interchangeable lenses. 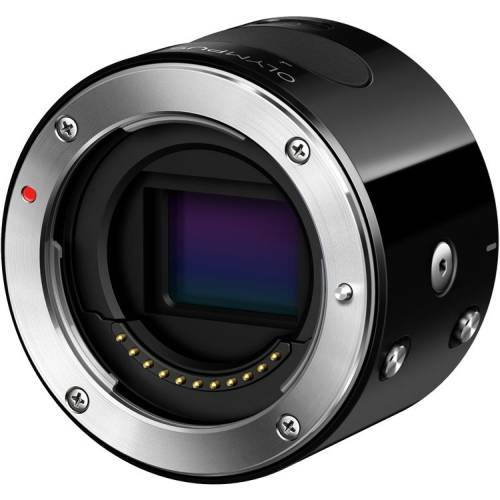 The Olympus Air A01 launches in the United States this month for $299 and up, and it should be available in Canada in August.

What you get for $299 is a camera that has no lens or display. But you can use any lens that supports the Micro Four Thirds standard and use your iPhone or Android device as a display.

The Olympus Air A01 features a 16 megapixel sensor, TruePic VII image processor, and support for:

The system has a built-in battery, a microSD card for saving images, and it’s designed to work with mobile apps so that you can save images to your phone and/or share pictures via email, social networks, or other apps. The app also supports Amazon Cloud Drive for automatic cloud backup of your photos.

You also use the mobile app to control the camera’s settings by adjusting exposure, white balance, ISO speed or other settings.

Olympus also offers a software development kit which could enable support for third-party apps that work with the Air A01.