Microsoft’s Cortana software is a digital personal assistant that can respond to voice or text commands or questions. First introduced for Windows Phone, Cortana will be a key component of Windows 10 when it launches July 29th.

Cortana is also coming to iOS and Android. And if you don’t feel like waiting for Microsoft to officially release the Android version you can take a leaked copy for a spin right now. 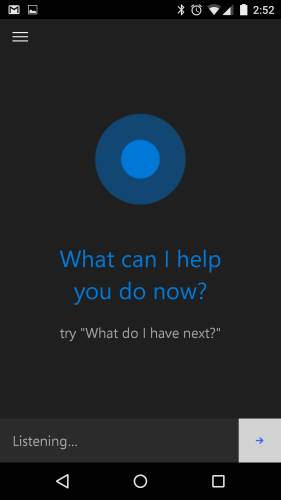 Several websites including PocketNow and The Verge have posted links to download locations for the pre-release version of Cortana for Android. Microsoft plans to release an official beta later this month, with an iOS version coming later this year.

Like the Windows version of Cortana, the Android app lets you search or ask questions by voice, view information from Cortana’s notebook, and get news and information that’s relevant to your interests including local weather, nearby places to eat, weather forecasts, flight tracking, and more.

You can ask Cortana to set an alarm for a certain time, remind you to do something in a set period of minutes, or perform other actions.

Since Cortana doesn’t have the same system-level access on Android that it does on Windows, you can’t launch the app by saying “Hey Cortana.”

Update: It looks like Microsoft launched a private beta of Cortana for Android a few days ago. You can sign up for legitimate early access by taking a survey and signing up for the Windows Insider program. Or you can follow one of the links to a download that some beta tester probably decided to share.