Gigabyte is getting ready to add a few new computers to its BRIX family of mini PCs. The Gigabyte BRIX GB-BXCE-3205 is a compact computer with a 15 watt Intel Celeron 3205U Haswell processor, while the BRIX GB-BACE-3000 features an even lower-power 4 watt Celeron N3000 Braswell chip.

Fanless Tech obtained a document that provides some specs for the upcoming systems. 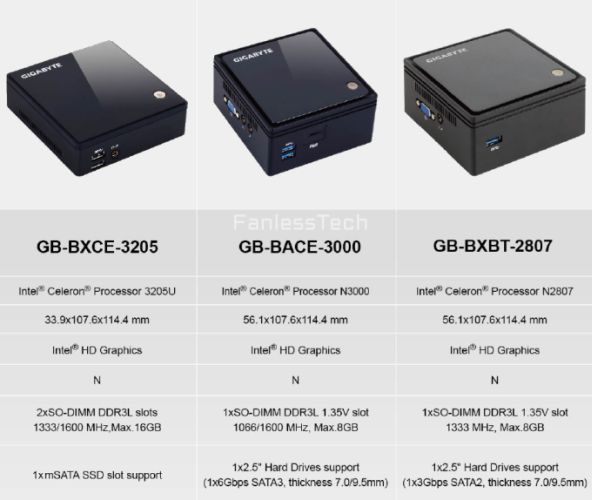 The model with the Braswell chip features room in the case for a 2.5 inch hard drive, 1 memory slot for up to 8GB of storage, and a range of ports including four USB 3.0 ports, VGA, and HDMI ports, Gigabit Ethernet. The system also features 802.11ac WiFi and Bluetooth 4.0.

Gigabyte already offers several BRIX mini PCs with Broadwell chips, but the model with the Celeron 3205U will probably be one of the most affordable of the bunch. While this model will probably offer better performance than the Braswell version, the Gigabyte BRIX BXCE-3205 is actually a bit smaller, measuring 4.5″ x 4.2″ x 1.3″.

That’s because Gigabyte left out the 2.5 inch drive bay in this model, and instead included a smaller mSATA SSD slot. The Broadwell version also has 2 memory card slots for up to 16GB of RAM.

There’s no word on how much the new BRIX systems will cost or when they’ll be available. But a barebones Gigabyte BRIX PC with an Intel Celeron Bay Trail processor sells for about $100. It’s likely that the Braswell version won’t cost much more than that… although you’ll probably need to supply your own memory, storage, and operating system.