Microsoft started rolling out Windows 10 on July 29t, 2015, allowing users to update to Windows 10 for free if using a computer that runs Windows 7 or later. Customers could also buy a new PC with Windows 10 pre-installed, or buy a boxed (or downloadable) copy of Microsoft’s latest operating system for PCs.

But there’s not just be one version of Windows 10 for PCs. At launch, there were four: Windows 10 Home, Pro, Enterprise, and Education.

And in 2017, Microsoft complicated things further with the introduction of Windows 10 S. If you scroll down to the bottom of this article, you’ll find a table that shows the differences between Windows 10 S, Home, Pro, Enterprise, and Education editions. 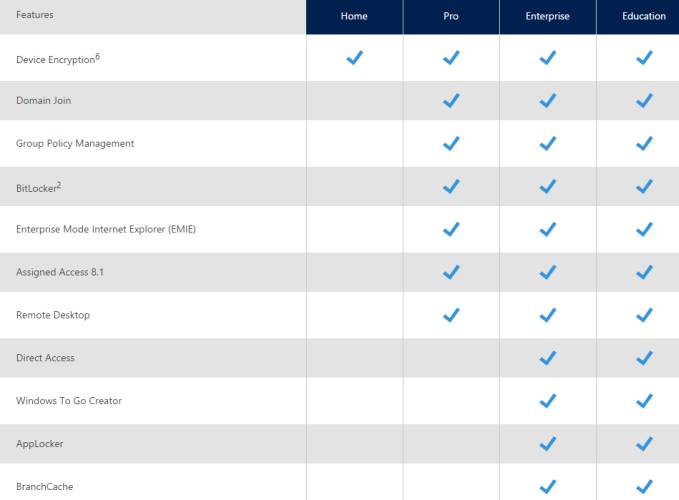 Microsoft had already provided a rough outline of the differences between these versions. Now that July 29th is fast approaching, the company is providing more details about what makes one version of Windows 10 different from another.

All four feature the new Windows Start Menu and Edge web browser, Cortana personal assistant software, support for new security features including facial and fingerprint recognition, virtual desktop support, and continuum mode for seamlessly transitioning from PC to tablet mode when you detach a keyboard from a tablet.

Meanwhile Enterprise users get some features that aren’t available for Windows 10 Pro, including AppLocker, Windows To Go Creator, Credential Guard, and Device Guard.

For the most part Windows 10 Education is the same as Windows 10 Enterprise… it’s just meant for use in a school environment rather than a business.

One feature that’s only available to Windows 10 Enterprise uses is “Long Term Servicing Branch,” which basically means that enterprise customers can postpone Windows updates that provide new features for years, while continuing to receive security updates.

While upgrading to Windows 10 will net you some new features, you’ll also lose some things that were available in earlier versions of Windows. Native support for DVD playback is no longer supported, but you’ll be able to install third-party video players that can handle it. Windows Media Center isn’t available for Windows 10.

2017 Update: Here’s a chart showing some of the key features of Windows 10 S, Home, Pro, Enterprise, and Education editions:

33 replies on “Differences between Windows 10 Home, Pro, Enterprise, and Education”