Google recently introduced new tools that make it possible to play games on your TV with the help of a $35 Chromecast and a smartphone. While the Chromecast doesn’t have the processing chops to render fancy graphics on its own, it can display HD video streamed from your phone… so Google’s Remote Display API lets your phone do all the hard work while the results are displayed on your TV.

At Google I/O, the company showed off a few Android games running on a big screen TV this way. But why stop there? You can also run a classic PC game: Quake III now supports Chromecast (when you’re using it with an Android phone or tablet). 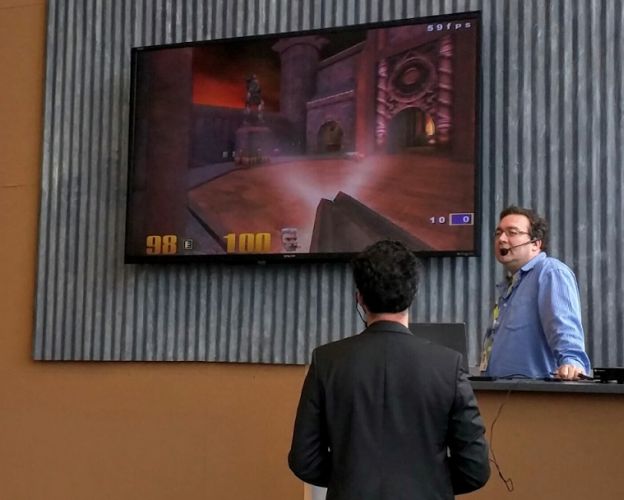 Google took an existing Android port of the Quake III Arena open source engine, tweaked it to work with a Chromecast, and ended up with a solution that lets you run the 1999 3D shooter game on your phone while viewing the action on your TV. You can use your phone as a game controller, but you could also pair a Bluetooth or USB gamepad with your phone for a more PC/console-like gaming experience.

While Google hasn’t released a Quake III for Chromecast app to the Play Store, the company has released the source code it used during a demonstration at Google I/O. You’ll need to compile it yourself and copy game data from Quake III in order to actually play the game.

Want to see what some other Chromecast games look like in action? Lory got a chance to check out a demo at Google I/O in May: