It turns out Microsoft doesn’t really think the Ask Toolbar is malware.

The company updated its anti-malware tools recently and flagged the software that comes bundled with the Java installer for Windows computers as high-risk software which should be automatically detected and removed. But it turns out Microsoft was only talking about an older version of the toolbar… not the most recent version.

So unlike a large number of readers who spoke up in the comments of our last article on the topic, it turns out Microsoft doesn’t actually think the Ask Toolbar is malware. 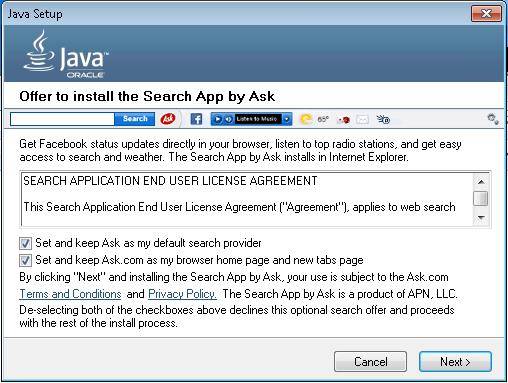 That said… it is certainly annoying. The Ask Toolbar changes your default search provider, adds an annoying toolbar to the top of your web browser, and can be tricky to uninstall.

I’m not sure anyone in history has ever installed the toolbar on purpose. Instead, they probably just didn’t notice the option to uninstall it when loading Java on their computer.

I guess the newer version of the app doesn’t do that… but I don’t feel like installing it to find out. Anyone want to take one for the team?

16 replies on “Update: Microsoft isn’t treating the Ask Toolbar as malware (unlike you)”