Printers are pretty cheap these days (it’s the ink that’s expensive). But what if you want to print your documents in way that’s a bit more… Rube Goldberg-esque?

Chris Gregg (with a little help from his friends) has figured out how to turn a Smith Corona typewriter from the 1960s into a printer that works with a computer. 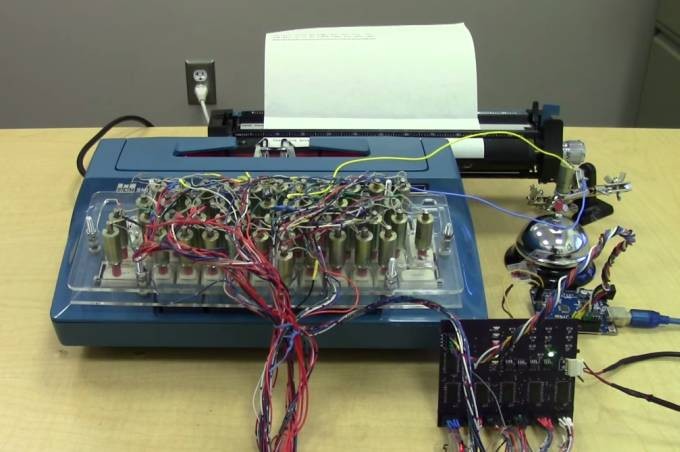 The typewriter doesn’t have any electronic components under the hood, so there was no simple way to wire up the system to automatically trigger key presses. Instead Gregg ended up building a system of Solenoids that would hang out above the keyboard and manually press each key.

So when you type up a document on your computer and hit the print button, a series of commands are sent to an Arduino which then talks to the hardware so that the document will by typed up on the Smith Corona.

Right now the system is pretty much text-only, but there’s talk about creating a program that could translate graphics into ASCII art so that pictures could be typed up… although that might be asking a lot from a typewriter that’s half a century old.

Gregg did create a demo video showing off the typewriter’s musical chops though: it does a pretty mean rendition of “The Typewriter.”

So what’s the actual advantage of using a typewriter a printer? Well, you can create type-written documents without smudging the paper with white-out, since you can make corrections on your computer before sending the print job to the typewriter. But mostly, it’s just kind of a useless, expensive, and awesome project.

In Gregg’s case, it was also a learning experience. He learned how to design a printed circuit board and to surface mount solder while working on the project with one of his students at Tufts University.

7 replies on “Turning a classic typewriter into a printer”